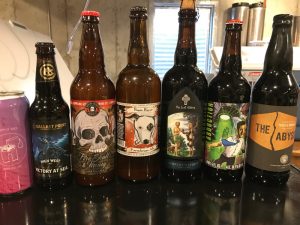 American craft beer prices continue to climb. There seems to be no stop in site. It drives me to home brew more often in spite of a crazy busy day-to-day schedule. 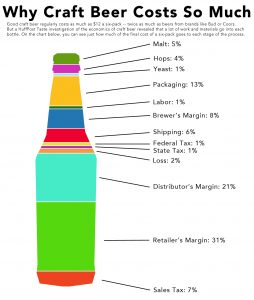 Only one beer under $10.00. And, that beer, when I originally had it was only $6.99. That is a $2.00 price hike or, more meaningful, a 28.6% price hike. Other beers, on the list above, that I have reviewed on Two Beer Dudes, have had similar price hikes (why logging this crap is so important).

According to the graphic (huffingtonpost.com) some 52% of the cost of American craft beer comes from the distributor and retail markups. Never thought it was that much. Wait. Why does beer still cost so much when purchased directly from the brewery?

Past articles on American craft cost:

Some of the articles above were speculative. Surprisingly, possibly not, but some of those have come true. Especially the post on American craft beer limited lease price increases.

The only way that change will occur: people have to stop paying the rising prices for American craft beer. But, the fever is on, it is the in thing. This is scary similar to the wine industry some 15 – 20 years ago.

Prediction: I think that the American craft beer bubble is going to burst in the next three to five years.

In the meantime, make mine a home brew. Enjoy!