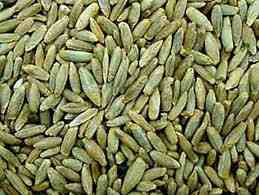 What better way to celebrate Memorial Day than making a good ole home brew. I was up early, so I was gathering the necessary equipment by 7:30am with water heating shortly thereafter. I brewed my first Saison, Albatross, back in February (which reminds me that I have to do an official tasting). It was time for another.

I learned a few thing about WLP566 during the first: it likes heat, it likes heat, and it likes heat. I ramped the yeast up to 84 degrees over a few day period. It was down to 1.002 like lightening. Of course I was worried about the flavors and aromas that could be imparted on the beer based on those temperatures but research showed this yeast liked to be pushed to the limit. I comment more about that in an official tasting this weekend.

This second Saison needed some rye. I never brewed with rye, so why not? I have had many beers, covering several styles, that had some amount of rye in them. It seems in all cases I appreciated the beers that had hints of rye profile, not dominated by it. As a good starting point, I settled on 1# (7.1%) in a 5.5 gallon batch. I also decided that two gallons would be bottled after primary while the other three gallons would have some Brettanomyces added (B. bruxellensis and B. claussenii) after primary.

The rye should add some proteins that should enhance mouth feel. I used a higher mash temperature (154 this time versus 148 in the original) as well, but this was to aid in keeping a bit of fermentables for the Brett with hopes of achieving more Brett character. Obviouisly those first two gallons serve as a control for how the rye affected the beer but, more importantly, the ability to not have to wait another month or so for the Brett strains to work their magic.

2012-06-01 – Up at 84*F for about 24 hours, still a bubble in the air lock every two seconds. Nice fruity esters have adorned the fermentation room the past few days.

2012-09-23 – Bottled the last three gallons that had been sitting on Brettanomyces bruxellensis and claussenii.

Useless Fact: The dot over the letter ‘i’ is called a tittle.

This entry was posted on Tuesday, May 29th, 2012 at 2:59 am and is filed under Home Brewing. You can follow any responses to this entry through the RSS 2.0 feed. Both comments and pings are currently closed.