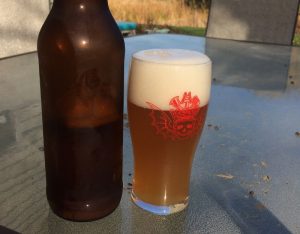 I continue to stand by my claim that my sense of taste and aroma evolve as more potent version of India Pale Ales (IPAs) hit the craft beer market. This causes my perception of beers gone by to no longer have the same quality of impact. My home brewing is affected by these changed perceptions: I need to increase the hop profile, keeping my senses appetite satiated.

Smiles IPA was my second attempt at a Northeastern style IPA. I used a bit more varied malt profile and multiple type of hops as compared to Used. The hope was to push the hops to 11, allowing my lack of location to the Norther east, to not inhibit my ability to enjoy juicy, ripe IPAs.

Look: Pours cloudy with a half finger of white, loosely packed bubbled foam. Retention is meager for an IPA. Mildly effervescent.

Taste: Taste isn’t as big as the aroma. Tropical fruit is there, less instense. A little of the base malt comes through. Citrus.

Body:
A little on the thin side, only carried by the carbonation. Not oily in spite of the amount of oats. Dry finish.

Overall:
The aroma outshines the taste and, be far, is the best part of this beer. If I was to brew again, I would add more late kettle hops and probably some type of speciality grain to give it more malt character. Too neutral for me.

A better attempt at a Northeastern style IPA than Used. Getting closer but still missing something. Yeast? Hop process? Water profile? Enjoy!

Useless Fact: 93% of the Great Barrier Reef is now damaged by coral bleaching.