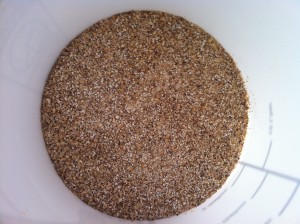 It has been almost two years since I last brewed up a batch of Honey Pot Pale Ale. This is one of those beers that is for my wife. She purchased the honey over the holidays and has been asking me to brew up a batch since that time (and probably before). I couldn’t keep telling her no any longer. I picked up a packet of S-05, honey malt, and crystal 40. Of course I tweaked the recipe a bit more to my liking: dropping the 0.5 ounce of Fuggles, while upping the Amarillo addition to an ounce from a half-ounce. My wife is coming around on hops, so this should be an acceptable change.

Last week I brewed an IPA named Clash of Hops. The efficiency of that batch was a bit lower than I would have expected. The setting on my mill was right were I had set it: 0.35 mm (or is that 0.035 mm). While reading a post on homebrewtalk.com for some other reason than efficiency, I noticed a reponse that said their mill was set at 0.2 mm, with immediate increase in efficiency. The writing was on the wall: tighten up the gap to 0.31 mm. 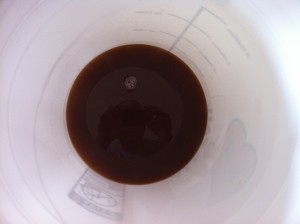 The change increased efficiency greatly over that last Honey Pot Pale Ale brew day. I didn’t have any issues with a stuck sparge either (why I only cranked it to 0.31 mm). There is a chance I will crank it down a bit more but I am worried about some of the home brews in which I use a heavier dose of wheat in. I might continuously tighten the mill by 0.01 mm until I get to the point of ease of sparging diminishing.

This beer should be ready, in the bottle, by mid-April, just in time for that hopeful first stretch of warm weather. Enjoy!

Useless Fact: A cow gives nearly 200,000 glasses of milk in her lifetime.