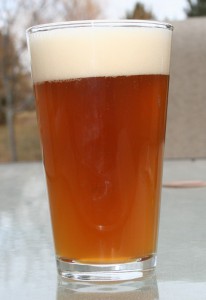 In early December, 2012, I brewed up a batch of Blast, the start of a series of Imperial IPAs known as Alpha Acid Aspirations.

Blast is my first attempt at adding rolled oats to the grist in order to achieve mouth feel within a DIPA while trying to keep the beer dry. It is also the first time I have used Pilsner malt in a DIPA.

I believe I achieved the mouth feel I was going for (read more below) but I didn’t feel the beer was as dry as I would like in a DIPA. Possibly the oats but I usually use one pound of sugar, this time I only used a half pound. I did mash at 150 degrees which should be about right. I feel I have two courses of action next time: less oats or lower mash temperature. Don’t want to try both at the same time as I don’t know which one would be the difference changer and to what degree.

The Pilsner malt didn’t do anything fantastic to the overall flavor or aroma of the beer. I wasn’t looking for much and achieved it precisely. I don’t think I will use the more expensive malt in the future. Save my pennies for the next batch.

Per typical I have taste tested this beer a good three or four times prior to the write up.

Look: The beer has a cloudy haze that limits visibility to 50%, while darkening the beer to deep orange/gold color. The foam is an inch high of tightly packed tiny bubbles. Retention is right on for a DIPA with thick, coating lacing, even in spite of the oats.

Aroma: Hop forward. Bright orange citrus and tropical scents fill the nostrils while a touch of pine follows through. Malts are subdued, as expected, giving off ideas of grain and bread/dough. I think this might be a product of both the Pilsner and oats.

Taste: A burst of tropical and orange hops flavors label the palate. Lightly toasted bread holds up the malt end. The finish brings more hop, leaving a trailing orange and pine bitterness that doesn’t over power but does dull the buds.

Drinkability: Medium body or better with, at best, medium carbonation. Drying but juicing fruit can be had as well. Needs to be drier.

Overall: This beer is all about the hops; keeping with my west coast DIPA style. I will make this beer again, as the overall profile of the beer is pleasing, just a couple of flaws. A bit of tweaking should make this a staple in the home brewing repertoire. Viva the hop.

Part two in the Alpha Acid Aspiration series was dry hopped today as well. Should be ready in about two weeks. More delicious DIPA to come. Enjoy!

Useless Fact: A person cannot taste food unless it is mixed with saliva. For example, if a strong-tasting substance like salt is placed on a dry tongue, the taste buds will not be able to taste it. As soon as a drop of saliva is added and the salt is dissolved, however, a definite taste sensation results. This is true for all foods.