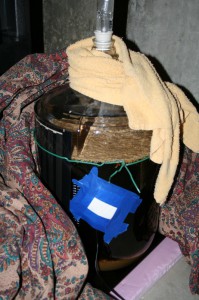 Back a little over a year ago when I first brewed Bad Tipper, I felt like a pioneer. The one brewing club that I am is more of a “beginners” club that people graduate from. I have never heard conversations about such things except in dark corners in the back under hushed tones. I was venturing into wild yeast and bacteria for the first time in my brewing career and, the best of my knowledge, anyone in my brewing club. Exciting to say the least.

That first batch also set me on the path to realizing I would be brewing this beer every year. The ideas of what I could do with this beer have been grand. A bad spring that killed off the sour cherry crop ended one train of thought. What to do? I know, brew the beer again and blend them into a used bourbon barrel. The new batch can be used for top-off, if needed, and I can use some the new batch with sour cherries this year (here’s hoping for a great crop).

The second annual brew day of Bad Tipper Oud Bruin went well. The numbers were close but more importantly the process seemed to go well, I wasn’t distracted and the new fermentation process I am using is going to only make my home brews more tasty.

The goals of using this beer in conjunction with the inaugural batch along with some cherries (possibly more blending options) is what home brewing is all about. Enjoy!

Note: this recipe is straight from Brewing Classic Styles: 80 Winning Recipes Anyone Can Brew by Jamil Zainasheff and John Palmer.

Useless Fact: The term “the whole 9 yards” came from WWII fighter pilots in the Pacific. When arming their airplanes on the ground, the .50 caliber machine gun ammo belts measured exactly 27 feet, before being loaded into the fuselage. If the pilots fired all their ammo at a target, it got “the whole 9 yards.”