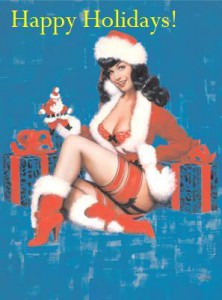 The annual work Christmas gathering is a good time. Appetizers abound and the so do the drinks. We have it at a local place named Jak’s. They serve up some rockin’ solid food and have an above average American craft beer tap list. There are usually at least 20 American craft beers on tap from all over the Midwest with some from the fringes of the coasts. I would never say their tap lists competes with the “hot spots” for American craft beer but holds it own while catering to trying to convert the macro people.

By the time I left work, there was a server timing issue, I only had an hour at the party before I had to head out to the “local to work” home brew shop. I had to pick up some supplies for the Hefeweizen that I am brewing for a work Holiday party in late January that the wife and I are hosting.

In my brief appearance, Two Hearted Ale by Bell’s Brewery, Inc, caught my eye. I hadn’t had it in a while, which is shameful of me, so I thought that I could have it at the pinnacle of taste and aroma: on tap. Two glasses later I had reconfirmed that Two Hearted is one of the best year round American IPAs that is brewed in the Midwest and can hold it’s own against the entire nation.

Citrus and floral hops jump out of the glass while balancing a sweet caramel malt backbone. Two Hearted is in perfect harmony, easy drinking, and refreshing. It is definitely a year round beer that can even be appreciated by non hop heads. Enjoy!

Useless Fact: Rhubarb is named after the Volga River. In Greek the name of Volga is Rha, and barb means “uncultivated.” Rhubarb is thus a wild plant that grows along the Volga.