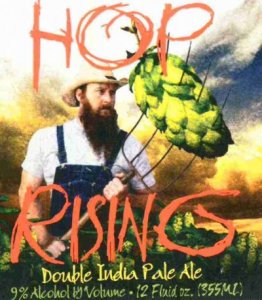 Squatters Hop Rising is an American craft beer brewed up by Utah Brewers Cooperative and is an American Imperial India Pale Ale. I received this beer as part of a Secret Santa BIF on one of the beer sites. When I send my beer, whether for a BIF or straight trade, I make sure that all the beer that needs to be fresh, is fresh. Unfortunately Hop Rising made it apparent that it was not fresh. The hops had fallen out and it was a caramel malt forward beer. The base beer was solid but the aroma and flavor hops were no where to be found.

I feel I really couldn’t give a fair score of Hop Rising, so enough on that topic. Hopefully I will get a fresh bottle some day. Now onto the rant 🙂

I only do a Secret Santa BIF because I have a tendency to go above an beyond and believe there are cheap asses out there that will barely meet the minimum, after all there hearts are made of stone and they think that they are under no obligation. I try to think that people are good and upon entering a SS the best in them will bubble up to the top. This year my thoughts couldn’t be further from the truth.

The person that sent to me was from Texas. Don’t jump to conclusions, I have nothing against people from Texas. The beer I received was mainly locals and most of the locals carry a lower end of a decent beer scores. The person said he was trying to send beer that showed off his state’s brewing prowess. Great, just make sure that fucking beers are good. There are beers from Illinois, the state I live in and proud of, that I would would never send to someone. Show off the best of your state not the mediocre shit you can pick up off the shelves. Besides all of this, he only sent me one beer that was to my favorite style. That just points to laziness, no effort, and I don’t give a shit attitude.

As part of the SS you are also supposed to send glassware, a shirt, and some type of seasonal food. I received one Weiss beer glass, that’s it. No shirt and no food. I posted to him that this wasn’t there and he said this is about the beer and forgot to send the food but nothing about a shirt. I don’t think the food would have fit and he obviously blew off the shirt part of the BIF. I just love that he said it was about the beer, that is true, so where the hell are some beers that show you actually gave some thought and effort?

I am pissed, if you haven’t figured that out yet. I might not participate next year. I really wanted to rip the guy on the message boards but trying to be civil, I did not, so I chose this forum. I even saw another person, that was sent beer from Texas, that received a worse group of beer and goodies than me.

It saddens me that people shit on the SS BIF and will probably end up receiving much, much more beer and higher quality beer than I received and there is nothing I can do about. There really isn’t an avenue that will make the situation better. Now that I have said my peace I will move on but the SS BIF is going to lose one of the people that actually put a ton of effort into making sure the target is happy. Enjoy!

Useless Fact: Question: What is unusual about the sentence “Jackdaws love my big sphinx of quartz”? Answer: It is the shortest English sentence yet devised to include all the letters of the alphabet.