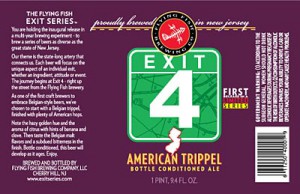 Every time I get a new American craft beer I wait for a sunny day and snap a picture of the beer with the idea it will eventually end up on the Two Beer Dudes site. Obviously some beers make their down to the cellar for an extended stay which strangely enough creates a bit of dilemma: there is the fact that I only have one of some beers and should I drink it now or drink it later. I have nothing to compare that cellared beer to (18 plus months). What did it taste like fresh?

The thing that pisses me off more than anything is pulling a beer out of the cellar, as I did with Exit 4 by Flying Fish Brewing Company, and being able to find the damn picture. Since I couldn’t find the picture and I was in a somewhat bad mood (long day at work that just tired me out), I didn’t feel like reviewing the beer on the site.

This will be a mental regurgitation (no funny remarks). The pour was slightly cloudy from the yeast cake from the bottle of the bottle with a inch of pure white foam. Thick, white foam hung on the glass like my grandmother hung doilies on her couches. The aroma was mute with a dank/musty scent being about the only essence emitted. The taste was much fuller: dark fruits mixed with paler fruits came through. Of course a bit of yeast, alcohol, and a touch of spice could be noticed. A nice drinking beer that I need a picture of and another serving. Enjoy!

Useless Fact: The University of Calcutta has 175,000 students.