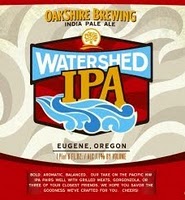 American craft beer that is brewed by Oakshire Brewery has been on Rich’s and my radar for a while. We have heard good things about their craft and have always wanted to lay our hands on a few bottles. Of course beer trading makes this all possible when there really is no other viable method of landing Oakshire beer.

A recent transaction landed us a bottle of Watershed IPA, Oakshire’s year round American. The beer is straight forward centered around hops. Floral, citrus, grapefruit, and I even thought wood hop aromas poured from the glass. Pale malts are the backbone with the beer showing little signs of sweet while being dry.

Possibly too much for your casual American craft beer drinker, Watershed is a rock solid beer that would easily be appreciated by any hop head. Enjoy!

Useless Fact: Suetonius Tranquillis reported in his Life of Augustus that the great Roman poet Vergil once held a funeral for a dead fly, complete with pallbearers and lengthy eulogies. In ancient Rome, cemetery land was not taxible. By interring a fly on the land surrounding his private villa, the wily poet turned his home into a burial ground and thus made it tax-exempt.