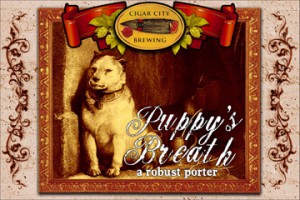 The family vacation went by like a blur as they all do. I had the chance to visit multiple craft breweries and have a few fine American craft beers but not the time to keep up with the blog. Hopefully will have this finished between today and tomorrow.

Beer number 218 comes from my tour at Cigar City Brewing: Puppy’s Breath Porter. One of several beers I had on tap before, during, and after the tour but the only one I hadn’t had before. The spotlight of the beer in both the aroma and taste was roasted malt. It actually was the main ingredient that came through period.

I thought Puppy’s Breath needed a bit more complexity, as Cigar City beers usually do. I would have it again but other offerings would find my glass first. Enjoy!

Useless Fact: Japanese farmers, after removing the hulls from their rice crop and sorting out the white kernels, take the hulls from the leftover rice, mix them into a kind of paste, mold the substance into brick-shaped blocks, and build houses with them. Such buildings are known in Japan as “houses of rice skin”.