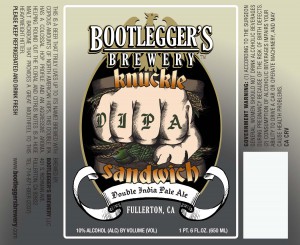 Going down into the cellar and finding an American IPA that I didn’t know I had creates both joy and fear. Joy obviously because I have the chance to have another American craft beer in my favorite style (one of my multitude of favorite styles). Feat as I wonder how long said beer has been sitting in the cellar as IPAs are not cellaring beers, they are drinking beers.

So with excitement and trepidation I put Knuckle Sandwich by Bootlegger’s Brewery into the fridge to get it cold for Chuck and I. The only two that could make this week’s Thursday night get together.

Since I didn’t know the age of the beer or if it was a short release, I decided to search the web for some hints. Based on what I found the beer had last been bottled in late March. Doing quick math it didn’t take long to know this beer was going to be past the prime of its youth. A bit of worry overcame me as I had heard good things about this beer and didn’t want to have to endure a resinous melt down.

The hops had fallen some but this beer seemed so well put together that it didn’t really affect the experience. Grapefruit and pine hops were still noticeable with the grapefruit really punching through in the finish, leaving a bitter edge. Caramel malts were the backbone, keeping pace with the huge hop additions.

Per any old IPA, I know want a fresh bottle with a pint on tap being optimal. Until that happens I will have my review to remind of an indulgence still to come. Enjoy!

Useless Fact: In 1060 a coin was minted in England shaped like a clover. The user could break off any of the four leaves and use them as separate pieces of currency.