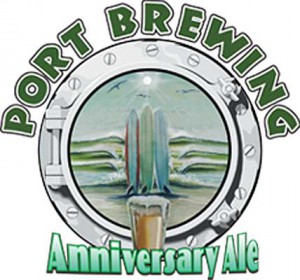 Anniversary beers always seem a bit gimmicky to me. The beers seem to be some type of test batch that has extra spice added to give a twist to a particular style. In my opinion, not the finest of American craft beer moments.

Rich and family were over last night and he brought a bottle of Anniversary Ale from Port Brewing Company to share on the evening. I have to admit I was suspect up front because of past expectations and experiences with Anniversary beers. I am so happy that my expectations were not lived up to. Anniversary Ale has big helpings of grapefruit hops that show through in each facet of the beer. The aroma and bitter finish went well with the Mexican food my wife cooked up for dinner.

My mind hasn’t changed about Anniversary ales but I definitely will be back for more of this one by Port. Why can’t other American craft breweries relax a little on their Anniversary ales and make something so easy to appreciate? Enjoy!

Useless Fact: The White Shark has teeth that rank on a scale of hardness with steel, is the only creature in the sea with no natural enemies; even killer whales normally avoid it, can survive brain damage better than any animal in the world, never gets sick. It has mysterious antibodies that give it immunity to practically every known bacterial invader. It is also one of the few animals known to be completely immune to cancer, can hear sounds a mile away, and is always hungry; no matter how much it eats, its appetite is never satisfied—it lives in a state of continual hunger.