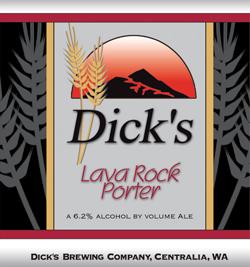 In spite of being close to the end of May, the weather in Chicago has not really warmed up that well. We have had a few teaser days but nothing sustained and overall the temperature has been below normal. To be honest, I am not complaining, but rather reporting. 70 is about my limit on temperature. I like it cool or comfortable in my book.

With the continued coolness it has kept my thirst going for a bit heavier beers. Lava Rock Porter by Dick’s Brewing Company hit the mark. A beer not normally available here, it is a transaction beer. I have to admit when I saw the ratings on some sites on the net I wasn’t overally joyed with the chance up front. No, it wasn’t’ going to be bad, I just didn’t think it was going to be a game breaker.

That’s why we all want to try American craft beers ourselves: we all have our own set of senses that perceive things differently. I thought that lava rocks had plenty of character: good, complex maltiness mellowed by spicy, herbal, and earthly hop additions. Definitely a smooth and easy drinking porter. Enjoy!

Useless Fact: In 1824, Andrew Jackson received more popular votes than John Adams, yet lost the election. The vote was so close that neither candidate received a majority of the electoral votes. The decision then went to the House of Representatives, which elected Adams.