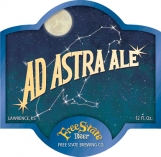 American craft beer from each sate in the United States doesn’t sound like that difficult of a task. Since I am trying to accomplish this I can attest to the fact that it might not be as easy as it sounds. Unless you travel a lot and too many different states, how do you get the beers? There are states like Mississippi, that at last look at least, only had on brewery producing beer in the entire state. Even if a state has multiple breweries or brew pubs, what if they are small and don’t bottle/can? And, going for the last, what if there isn’t really “good” beer produced in the state? All this has gone through my mind and has made my mission a bit more difficult. Finding people to do a transaction with and finding good beer that I actually might want to try is proving a bit daunting for some “smaller” beer states.

Free State Brewing Company reigns from Kansas. It is the only brewery that I have had beer from in the state and Ad Astra Ale marks the second flavor of beer I have had (Old Backus Barleywine was the other shared by a friend).

Ad Astra Ale comes across with a could bready/biscuit backbone that is a bit sweet and sticky on the lips. There is a nice clean, crisp hop profile that adds a bit of spice to the finish. Definitely easy to drink and a beer that would go well with a hot, humid day. Enjoy!

Useless Fact: George Parker Bidder, builder of London’s Victoria docks in the nineteenth century, could figure problems like “How many times does 15,228 go into the cute of a 36” in four seconds. Bidder’s brother memorized the entire Bible and could remember every date he ever read. George Bidder’s eldest son, George Bidder Jr., was able to multiply a fifteen-digit number by another fifteen-digit number mentally in less than a minute.