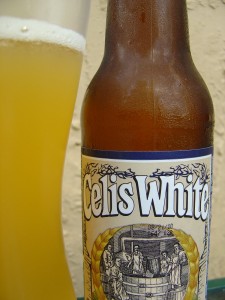 American craft beer on Wednesday evenings are tough. Wednesday is my night for basketball, I look forward to it like most people vie the end of the week. There are some problems being 41, over weight, bad knees, bad ankles, and using Wednesday night hoops as my only form of exercise: I am sore as hell!!!! I guess there is a second problem too: I can’t move on the court the way I used to. I was always slow but now the vertical jump (used to be 33″) has left me also. So now I am just a slow, fat, out of shape guy in his 40s playing hoops. Yes, you are right: it is a disgusting site.

Picking out a beer after a couple of hours of basketball usually means something light and easy drinking. Cellis White by Michigan Brewing Company spoke loudest when perusing the refrigerator for a quality American craft beer.

Cellis White is a Witbier with this beer being close to style. The beer was very clear, which according to style is off, but the aroma and taste had the wheat, Belgian yeast, orange, and spice. Definitely a refreshing and crisp beer that is easy drinking, which the low ABV (3.9%) aids. Enjoy!

Useless Fact: Babies are born without knee caps. They don’t appear until the child reaches 2-6 years of age.