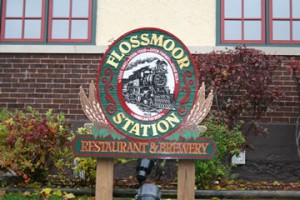 Saturday found me in line at the Flossmoor release of Hi-Fi Rye. Usually releases at Flossmoor are rather subdued and showing up for a release is unheard of.

Well this release of Hi-Fi Rye, the second, had Flossmoor decide they needed a ticket system. To make a long story short, they did. As it turns out, when I arrived at 11:30am, 30 minutes before release, I was handed ticket 237 and Rich ticket 238. Based on the number of cases, if everyone in front of us took their full allotment: six normal and six bourbon aged, we would have been left out in the cold. Fortunately that didn’t happen and we received what we wanted. Some 15 people or so after us, they ran out of the bourbon aged.

Since my mood wasn’t that great (as I thought I wouldn’t get beer) my wife went and picked me up a snifter of Bourbon Barrel Wooden Horse. I really didn’t take notes, so the little I will state is from memory. There was a subtle tartness to the finish while the bourbon hit large, yet smooth. It might have drowned out the beer just a touch too much but other wise, per most of Flossmoor’s bourbon aged beers, this was just what the doctor ordered. Enjoy!

Useless Fact: The Steel Phantom in West Millen, Pennsylvania, is the fastest roller coaster in America, reaching speeds of 80 miles (129 km) per hour.