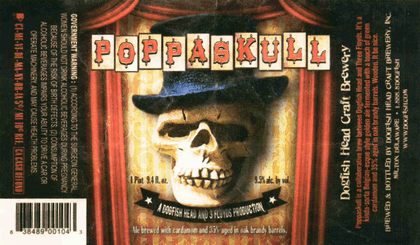 Dogfish Head Craft Brewed Ales recently was the center piece to a television program: “Brew Masters” on the Discovery Channel. I am sure that spotlight helped sales, hopefully it helped sales for all American craft beer. Dogfish Head seems to be a brewery that many, pro and amateur beer drinkers alike, believe to be great and innovative, producing high quality, drinkable beer.

I, unfortunately, am not one who finds greatness in their beers. I like their line of ipas: 60, 90, and 120 minute, but I think the 120 minutes is more realistically a barley wine and that is about where my desire for their beers stops.

Now, I am not really into bashing the brewers as I know that brewing is an art form and to each there own. I will stop on the overall brewery negativity here.

Poppaskull was a beer that was a collaboration between Dogfish Head and Three Floyds. I thought that Three Floyds would work some of their hop magic on the beer but I was disappointed. 35% of the beer was aged in brandy barrels. Outside of the beer being dry, I really couldn’t find any traces of brandy, oak, vanilla, etc; the usual oak aging suspects. The beer was okay, but I was expecting much more from two supposed powers houses in the industry putting together their collective talents. Enjoy!

Useless Fact: If you keep a Goldfish in the dark room, it will eventually turn white.