Thanksgiving Eve. This means that I don’t have to get ready for work in the morning and I can appreciate a few American craft beers without having to worry about the 4:30am alarm. This also means that the wife will be participating in a beer or two while we watch a movie.

Askew by Two Brothers Brewing Company is an American Wild Ale. A nice tart/sour beer that comes from a local brewery, which makes it doubly good.

I am looking forward to more sours from Two Brothers. I hope I don’t ave to wait to long or have to show up for some crazy release to get my share of the pie. Enjoy!

Useless Fact: The average brain comprises 2 percent of a person’s total body weight. Yet it requires 25 percent of all oxygen used by the body, as opposed to 12 percent used by the kidneys and 7 percent by the heart. 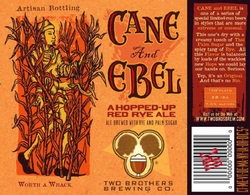 It isn’t often that the wife and I get a chance to spend an evening on our own. The plan was to see a move (Moneyball – wife’s choice, she used to work in minor league baseball), dinner, and a few drinks. The latter two accomplished by a visit to Two Brothers Brewing Company. We had grander plans but a long day of kids soccer curtailed those thoughts.

Two Brothers is an all but too infrequent of a stop. I am glad the wife suggested. The food is always good (although the buffalo chicken I had made me sweat for an hour), the service is solid, and the beers are darn tasty.

I have had Cane and Ebel before, on many occasions, but I have never reviewed on the site; this tasting didn’t break the mold. There is a nice hop assertiveness that pairs well with the rye that comes through. Both balance the crystal malt sweetness well. Next time I will have to officially review as it is a solid year round offering. Enjoy!

Consistency is what every brewer shoots for with their beers. When you make a beer annually, how easy is that? Especially when it comes to an IIPA or similar that if you taste it a year later will be no where near what it was originally.

This years batch of Hop Juice seemed different to me than in the past. In a good way actually: I couldn’t put it down. Two Brothers Brewing Company puts out this Imperial IPA each June.

Of course hops are a big part of this beer and the blend that I noticed was very inviting and pleasant. Mostly citrus and of the grapefruit persuasion, there is a slight bitterness but it doesn’t linger. Wonderfully balanced for a big beer. Caramel malt seems to stand out from the malt backbone but only to balance the hops.

Of course I only purchased one this year. I will have to wait for more unless I can find it on tap somewhere. Enjoy!

Useless Fact: The United States Postal Service assures its customers that they will not get fat licking stamps. There is no more than one-tenth of a calorie’s worth of glue on every stamp. 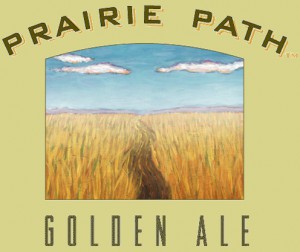 I have had this internal struggle with Two Brothers Brewing Company for quite some time now. About a year ago I gave them a second lease on life, retrying many of their beers with a new outlook. Happily most of the beers that I tried I liked and have them since. I have gone to the Two Brothers on numerous occasions with family or friends for food, beer, and/or a tour.

So last night I open up a bottle of Prairie Path Golden Ale, which is their interpretation of a Belgian pale ale. I don’t know what it was last night but Prairie Path just didn’t agree with me. I wasn’t feeling that well; maybe that had something to do with it.

This reminds me of one of the reasons why I doubted Two Brothers in the first place. I won’t let one beer persuade me to stop their offerings but I would say Prairie Path and I don’t mix well. Try some of their other offerings as they do make some really solid beers. Enjoy!

Useless Fact: The distance between an alligators eyes in inches, is directly proportional to the length of the alligator in feet.

A revisit to an old friend: Domain DuPage French Style Country Ale. Two Brothers is probably the closest brewery to my house and puts out some decent American craft beer. 2010 saw them step it up a notch, producing some new beers making me want to pick them up from time to time.

Early 2010 also was a time that I went back through their beers trying them again for the first time. I had had them but felt I was too opinionated and wanted to give them a second chance, especially since they are in my own back yard. After the second go around last year, I decided that Domain DuPage is a nice beer that I need to appreciate more often.

Amber in color, the pour produces a clear liquid with about an inch of frothy, white foam. A refreshing beer just about any time but much more so in the summer time. Aroma and flavor have sweet malts, apple, and hops. Nice blend. Now let’s have another. Enjoy!

Useless Fact:The deepest point in the deepest ocean is the Marianas Trench in the Pacific with a depth of 35,837 feet (10,923 m) according to a recent hydrographic survey. This is close to 7 miles (11 km) down, 29 times the height of the Empire State Building.

Two Brothers Brewing Company isn’t that far from home from me and even closer to my place of employment. Unbelievably I don’t make it out there all that often. Now this is due for two main factors: I haven’t been blown away by their offerings and the last time I tried to go there for a few beers after work, they were packed.

The first factor doesn’t need an explanation but maybe the second does. I prefer places that are at best about 75% full. I like to have a place to sit and I don’t want to feel like a sardine packed into a tight little corner spot. Why? I am fat, tall, and just an all around (no pun intended) big person. I need my damn space.

Each beer I get from Two Brothers I usually put off drinking until the mood strikes me. Their new Resistance IPA was given to me (as a sixer) by a coworker of my wife. I have given him at least 18 beers in the past (I enjoy sharing) but I have never received anything back. No, I don’t give beer and expect returns until it gets out of hand. Wash that hand that takes care of you. Enough of me bitching.

I had four Resistance IPAs before I even rated it; one damn good beer. I think that Two Brothers has done a great job here and kudos to them. I wouldn’t say it is a hop bomb like some people desire before they give a beer a good grade but a beer that is well balanced, easy drinking, delicious beer. I have already bought another six pack and plan on keeping this one in the normal cellar rotation.

Now, with that review, don’t worry, I plan on giving them another stop by after work to try some on tap. I hope they continue to bring it strong as it would be nice to have an outstanding, sought after brewery that close. Enjoy! 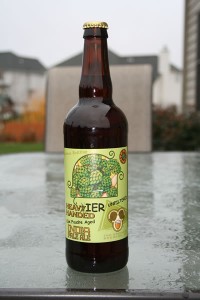