No matter how much I try to get into the Christmas spirit I never really go much for seasonal American craft beer. Christmas Ale by Goose Island Beer Company doesn’t really fall into that category as it is an American Brown Ale but any beer with “Christmas” in the title brings those notions to my head.

Christmas Ale should definitely be left out for a bit before drinking as straight from refrigeration isn’t a good idea: bitter dark malt and grotesquely bitter overall. After a bit of warming the beer settles done and drinks quite well.

My orginal rating, almost two years ago, probably should be updated as Christmas Ale is better than an average beer. I would say it is in the lower eight range.

Tonight is the last Thursday night get together for Rich, Chuck, Steve, and myself. I hope all is up for a few good beers before the New Year. Enjoy!

Useless Fact: Camels have three eyelids to protect themselves from blowing sand. 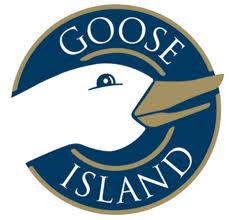 I knew that I was going to have some fantastic American craft beer while attending the ninth annual Festival of Wood and Barrel Aged Beer. It was a matter of limiting the list of candidates down to one beer that I could actually call beer number 347. No easy task.

Goose Island Beer Company is in the hometown of the festival, Chicago, so there was no way they were going to be misrepresented. I knew there would be some studly Bourbon County Brand Stout flavors and that was my target. I wasn’t disappointed by those flavors but they had some of the longest lines at the festival, attaining those beers was hard but not difficult.

Then the thought dawned on me: American barleywine. I am brewing a barleywine and have been drinking them all week to prepare for brew day, so why not try a shitload of barrel aged perfections. I did and this is where I found Broadshoulders Barleywine. Unfortunately it was an English barleywine, but it was the best in show for me.

After my taste of this beer I am going to call and ask if this is on tap at one of the Goose Island locations. It is a special beer. Enjoy!

Useless Fact: The Graham cracker was named after Sylvester Graham (1794-1851). A New England minister, Graham not only invented the cracker but also published a journal in Boston that took a rabid stand against tea, coffee, feather beds, and women’s corsets. 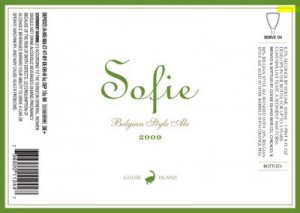 American craft beer on sale. It doesn’t happen that often for any of us but, when it does, it is something to behold. The amount of American craft beer that has flown off the shelves in the local liquor chain this past month has been something to behold. Supposedly they have sold so much Stone that they have dried up the supply at the distributor. Good or bad problem?

I of course, have taken my turn at the beer isles, contemplating what I should and shouldn’t buy. I sided on buying everything and anything I have really wanted lately but didn’t buy. I landed a few bottles that were $3.00 off on their own. Yes, it was basically purchases of pricier beers.

Not that Sofie by Goose Island Beer Company is expensive or hard to get, I haven’t had it in a while and for $6.99 for a bomber, how could I go wrong. Subtle scents and flavors of tart, sweet, spice, and juicy fruits, make Sofie quite the refreshing drinker. I might have to get a few more before the end of April. Enjoy!

Useless Fact: In one day a full-grown oak tree expels 7 tons of water through its leaves.

I think most people into the American craft beer industry know that Goose Island Beer Company was the first to start bourbon barrel aging beers. Bourbon County Brand Stout is one of the boldest, most straight forward bourbon beers around. The ABV is big (13.0%) while the tastes and aromas fill the senses to capacity. It is one mighty fine beer that people cellar to do vertical with. I think everyone has at least 2008 in the basement.

This past year, Goose Island took some of their best test batches and put them on the market. Coffee, Vanilla, and finally Rare hit the market. Each creating a frenzy fueled by the awesomeness of it’s predecessor. I was fortunate enough to get a case of coffee, that I mostly used to snag interesting beers from every nook and cranny of the U.S. Vanilla, I wasn’t so lucky, I ended up with two bottles; neither lasted long. Rare was last and the most expensive at $45. Ludicrous I said when I heard the price and thought i would never get one. Like a moron, I got four and I can say that I haven’t been upset. That is one solid beer.

If you are looking for a bourbon aged beer that goes to 11, try any of the offerings Goose Island has in this category. The easiest to get will be the old standby of Bourbon County Brand Stout, but you still might be able to find one of those other flavors. Enjoy!

Useless Fact: The original captain of Star Trek’s starship “Enterprise” was Jeffrey Hunter – not William Shatner – as Christopher Pike, in the pilot episode “The cage” (1964). The cast was quite different from that of the classic series except for Leonard Nimoy as Spock.