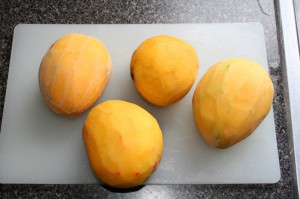 The time has come for Mango Saison to move from primary to secondary. I have been mulling over adding the mangos to this beer for a long time.

The process I settled on: 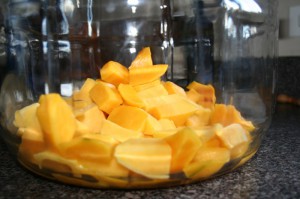 Not sure how long I need to let this mixture marinate. At this point I figure to start tasting around the month range, creating a timetable based on aroma/flavor from there.

I remember pitching the Brett with this beer on brew day, thinking that was a mistake. I am on the fence at this point. The aroma of the beer (I forgot to take the gravity) wasn’t quite what I was expecting and, since I didn’t taste it, I have not idea where to set expectations (Right now they aren’t high, which pains me).

I am still planning on dry hopping before I bottle (Motueka based on a lemon-lime, tropical, and spicy description, feel it should add a nice compliment to the Mango and base Saison). Enjoy!

Useless Fact: It is estimated that 4 million “junk” telephone calls, phone solicitations by persons or programmed machine are made every day in the United States! 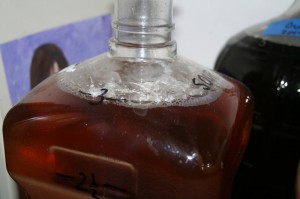 Saturday was to be a brew day as well as a bottling, racking, and dry hop day. I decided that bottling Texas Wedge Saison and racking/dry hopping the last two batches of Duck Hook IPA would be enough. Before I did all this beer moving, I had to run to the home brew shop to get some grain ground up for brewing, even if I decided to brew on Sunday, just so it was done. This also meant a stop at the local beer store across the street. 🙂

Texas Wedge was first up. I started the bottles in the dish washer before leaving for the home brew shop, placing the washer on a one-hour cycle. The bottles were ready upon arrival back at the house and brewing fun ensued. Priming sugar was readied quickly, placed in the bucket, the beer racked on top, and beer flowed from bottling bucket to each bottle in a flash. Clean up of the equipment was next. I use separate equipment when dealing with wild yeast and bacteria, just in case. All the equipment used for the bottling process was bacteria sanctioned stuff.

Next to ready sanitary water for the IPAs as well as getting hops and carboys. I used HBC 342 and Rakau in these two batches of Duck Hook. Each was racked on top of two ounces of the respective hop originally used. I also had about 16 ounces that I placed on Brett C. I dry hopped that with 0.1 ounces of Citra and 0.4 ounces of a guest hop. These hops have been sitting in the freezer for several months. Don’t know why or for what reason. Needless to say it will be fun tasting that 16 ounces.

After a 2.5 mile run in the morning along with the six plus hours of playing brewer, I am glad I decided to wait a day to brew Mango Saison. Enjoy!

Useless Fact: The wick of a trick candle has small amounts of magnesium in them. When you light the candle, you are also lighting the magnesium. When someone tries to blow out the flame, the magnesium inside the wick continues to burn and, in just a split second (or two or three), relights the wick.