So I think I had the next two beers I’m going to blog about last year, and I jotted notes on them and intended to include them in a big comparison of fresh hop beers, but I just never got around to it. So since they’re both beers I got in trades from a state I have yet to review, I figure I’ll do a blog about each of them. I could do a comparison tasting, but I’d rather let each be judged upon their own merits.

So, the first one is Hop Stalker by Fat Head’s Brewery out of Middleburg Heights, Ohio. I received it from a guy named David who I hadn’t traded with before. He actually sent me a couple of Ohio beers, but let’s just stay with the fresh hops. This one was bottled 10/4, so it’s about six weeks old.

The first thing about this beer that jumped out at me was the big smell of hops. Fresh, citrusy, and dank, yes, even at this age. It’s got a cloudy bronze tint to it that gets darker the higher in the glass, plus a creamy looking lacing and a constant carbonation stream. I think the taste has faded slightly, but it’s still got a healthy fresh citrus mixed with dankness and a bit of bitterness. I’m kind of surprised how not bitter it is for an 80 IBU beer, plus it’s rather crisp and clean with little evidence that it’s 7 percent ABV.

I think the thing I like best about it, other than the smell, is how balanced it is with citrusy hoppy flavor and the mild amount of bitterness.

A rather quite enjoyable beer. 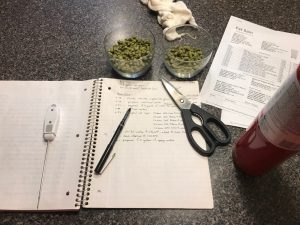 Fat Sam NEIPA home brew is named for aforementioned character, Fat Sam, from the movie Fletch. The days that Chevy Chase was putting out great movies was short lived but they were nonetheless awesome. While watching Fletch, Fat Sam kept popping up in the front of my head. George Wendt always poses as a lovable role character in the movies and on television. It was time for Fletch to rightly honored: Fat Sam.

A hopped up American amber ale would probably have been more fitting, especially when one takes into account his quote: “I got some reds.”

Continuing the quest for another NEIPA, I had decided that having high amounts of wheat and oats hadn’t been something that I brewed. I also hadn’t brewed a NEIPA with copious amounts of Mosiac and Citra. It seems that most of the “great” ones use one or the other or both. The Rakau was remnants sitting around from an earlier brew day. Enjoy!

Useless Fact: Warren Buffet filed his first tax return at age 13 to report income from his paper route, and claimed a $35 deduction for use of his bicycle. 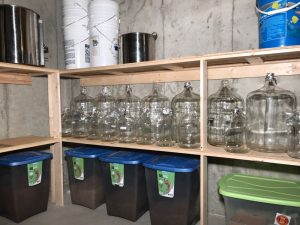 Scratch built shelves to house all my home brewing supplies.

I have been home brewing for ten years, give or take. It has been a wild ride. During that time I have tried many techniques, some fads and some that have built the foundation of how I continue to home brew.

Some of the techniques that I tried needed new equipment or adjustments to equipment that I already had on hand. Nonetheless, the accumulation of supplies had taken up a good portion of one basement corner. Everything was neatly on the floor but, due to size, the sheer amount of square footage eaten up was ridiculous, besides, it still looked messy. A thorn in my eye.

For a couple of months I had thoughts of creating some type of shelving. The shelving would solve multiple issues/problems:

The shelves were inspired by shelves a friend had built in his basement to store all of his wife’s stuff. The unit would allow my grain storage, which on wheels, to easily slide in and out on the bottom while the plastic container protects against water. The upper shelves would allow for carboys, kegs, kettles, etc to fit together nicely.

After eight hours of work, fourteen feet of shelving had been completed. The shelving was put together using the following:

I used all screws in order to allow for this to be taken apart. The 10′ shelf was on 24″ centers while the 4′ shelf was on 16″ centers. This was due to the fact of wanting to place bottled beer on the 4′ section. It is much sturdier. All legs were 24″ in height (this forced the kegs to a top shelf).

After cleanup, it was time to load up all the supplies into their new homes. A few rearrangements later and I think I had a good configuration.

There was the added bonus of ease of access to the supplies as well. Now I know I never need to purchase another carboy. Enjoy!

Useless Fact: Louis Chevrolet, the founder of Chevrolet, died bankrupt and poor working as a mechanic for the company he started.