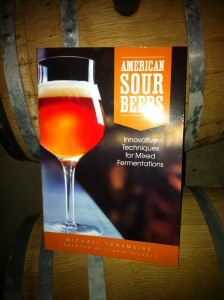 Seems fitting hanging out with the barrels.

I have been asking Michael Tonsmeire (The Mad Fermentationist) questions for at least three or four years: probably six months before I brewed my first foray into sour/wild home brewing. I wanted to know how I could work with Brett and how this magical yeast would be different from Sacch. Keeping it from contaminating my other beers and gear was a huge concern. I also learned that Brett does truly sour the way that the bacteria lacto does.

Since those early days my home brewery has lived harmoniously in the sour and normal beer realm. I feel like I have graduated to middle school. I have a miniscule amount of knowledge compared to Mike on the topic. Mike has had articles in BYO magazine for years but the first time I can remember him bringing up the idea of a book was via a poll on his blog.

I know that books aren’t easy to write so I had no idea if he would ever pull together his thoughts in one place. I was hopeful. Fortunately for the home brewing community Mike has a much more positive outlook on things than I do. 🙂

The book has been out a couple of months. Brando, the owner of the local home brewing store, Chicago Brew Werks, asked if I had read the book yet. He raved about the book. I had been intending to purchase but that was the last straw. I had to show my appreciation for all the hard work that Mike has put into helping funky home brewers and the book.

I am looking forward to the read. I am sure I won’t be able to put it down once I start. Friday night into the weekend will find me with book in one hand and a sour saison (review forthcoming) in the other. Enjoy!

Useless Fact: In 1980, a Las Vegas hospital suspended workers for betting on when patients would die.