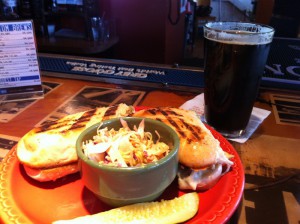 On the drive up to the Detroit suburbs, I was only thinking of the American craft beer that could be had in the area. There are easily 30 breweries in a one hour radius of my sister-in-laws house. Deciding which one(s) was originally thought to be difficult but a simple selection criteria popped into my head:

The Michigan brewery guides does one of the best jobs I have seen of putting all state breweries on a map: making is simple for anyone to plan a course.

Woodward was a pleasant surprise. I had the pesto chicken with and custom porter. The food was well above average with the cole slaw stealing the show. Kuhnhenn’s was usual: lot’s of big beers with lots of big flavors. I had a few DRIPAs.

Not a bad start to the long weekend that should include another new brewery on Friday and brewing on Sunday. Enjoy!