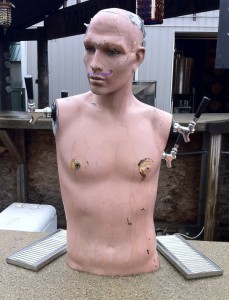 It has been a while, but we were off for another trip to the Detroit area of Michigan. My wife’s sister lives in the area and she likes to visit from time-to-time. The wife even asked if I wanted to leave early on Friday so that we could stop off for lunch at a brewery. That was music to my ears.

Of course I settled on Dark Horse Brewing Company. We have stopped at the brewery before and the entire family was happy, why not give it another try? I had a pint of an American IPA that I cannot remember the name of but I do know it had plenty of citra hops. I had two pints with lunch. After the kids played a bit on the outdoor stage it was time to head to our next destination: Ann Arbor.

I decided to have a pint at Blue Tractor. There were a few people eating outside that had sweet potato fries; the kids said they would like some, so why not have a beer with the fries. For me, not the kids. The fries were really good, the service was average in a stretch, and the beer was average as well.

Next time through I will have to take more time at Arbor or Grizzly Peak by having a taster. I leaning towards Gizzly Peak as I have had some Arbor beers in bottle format in the past. Enjoy!

Useless Fact: A 4-inch abalone can grip a rock with a force of 400 pounds. Two grown men are incapable of prying it up.