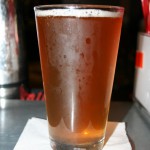 My second day in the Detroit area took me to three more American craft beer establishments. This time I was accomplished by the brother-in-law, Jim, and no one else. An afternoon of establishment hopping uninhibited by nothing but our own thresholds.

Bastone Brewery was our first stop. One of several American craft beer establishments located in downtown Royal Oak, it is one that I have never had the privilege to visit in the past. Since this was our first stop, we decided to limit to one and move on. I had their Royal IPA (seems like many of the local breweries use this in their naming convention). A grainy backbone is supported by citrus and floral hops that leaves a bitter grapefruit bite. The bitterness seems a little ramped up compared to the aroma and taste. Body and carbonation are average as is the beer itself. I would have it again but there are tons of IPAs that line up in front. 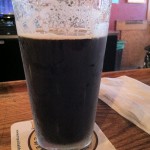 A short walk of two blocks (back where we parked) brought to the doors of Royal Oak Brewery. A couple of years ago I visited Royal Oak Brewery for lunch and a beer but don’t have much relocation. I was hoping this second visit would be more memorable. We bellied up to the bar and ordered. I ended up with a Cascadian Dark Ale simply named Black IPA. There was limited roasted and/or chocolate flavor that I find is necessary for the style. The hops seemed to be of Amarillo focus with orange and floral notes. I would have the Black IPA again, even in spite of not being 100%, it was tasty and refreshing enough to keep me coming back. I also had a bowl of their clam chowder for lunch. Tons of clams, potatoes, and other goodies that made for a fine and filling lunch. 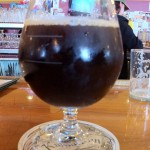 Into the vehicle we went for our 10 minute ride over to Kuhnhenn Brewing Company. I noticed that Bourbon Barrel Aged 4th Dementia was on tap, bingo. A 10oz pour (see pic) had to be close to double that as you can always get generous pours at Kuhnhenn’s. At 13.5% ABV this beer packs a punch. I sipped slowly so it could warm up, allowing me to appreciate at optimal temperatures, bringing out flavors and aromas as they were meant to be. Jim didn’t want a second, didn’t mind watching the basketball ornament while I had a second: Double Rice IPA. A good helping of citra helps this light bodied beer along and into my taste bud’s appreciation. Prior to leaving, I picked up six bottles of BBA 4th Dementia and a bottle of DRIPA to share with the Thursday night guys (on Tuesday).

My next trip to Michigan will hopefully be as rewarding as this trip from an American craft beer angle. Enjoy!

Useless Fact: The starfish is the only animal capable of turning its stomach inside-out. As it approaches its prey (usually a member of the mollusk family), the starfish reverses its viscera, protrudes them through its mouth, and projects them under the shell of its victim. Then it slowly devours the fleshy underparts of the helpless mollusk by a process of absorption.