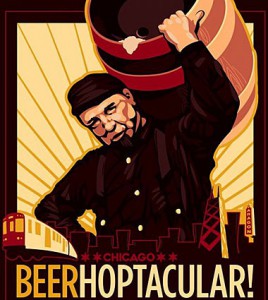 I received tickets to the 2011 Beer Hoptacular! for my birthday, from my Mom and Dad. That is some good loot for a birthday gift. Since my Mom and Dad gave me Rare Bourbon County Brand Stout for Christmas this past year, they have been really trying to center my gifts around American craft beer and home brewing. Thanks!

This is only the second year for the Hoptacular but it sold out 4,000 tickets to the Aragon Ballroom like butter. Once inside the event, my wife and I noticed that there was a huge mix of people: beer geeks, beer geek want-to-bes, and chicks that would never be caught with a beer geek (Women in dresses, heals, and pearls just don’t seem to be the kind of people I expect to see at a American craft beer fest).

The 4,000 people were spread over two sessions but that was still too many, especially in the balcony where it took us 25 minutes to get two beers, all the while sweat broke out on my brow from the body heat. To put it bluntly, I felt like I was at a college party and I should be doing some nonchalant groping. 😉

We manage to taste about 20 beers with Flossmoor Two Time leading the way for me. The list:

I don’t know if I will go back next year because of the crowd, especially if they don’t change the amount of people in each session. I will have to say I was impressed by the no drink limit. Enjoy!