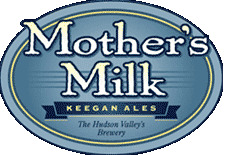 After four straight days of American craft beer brewed up by Three Floyds Brewing Company I figure it was time to change it. Of course those beers were all gratifying, it was time for a new direction: trying out some old 12 ounce beers from the cellar.

First up: Mother’s Milk by Keegan Ales. Mother’s Milk is a Milk Stout which is clearly identifiable once you pour the beer. The aroma shows a sweet side along with roast and chocolate. Although on the light side (aroma), the sweetness almost lends a creamy sense to the aroma. The taste is pretty similar but a bit stronger. Roast, sweet, chocolate, and creaminess all play to together nicely to form a very drinkable, not heavy drinking stout.

Subtle complexities to “smaller” stouts agree with me for some reason. A great stout for the summer months. Enjoy!

Useless Fact: An orange tree may bear oranges for more than 100 years. The famous “Constable Tree,” an orange tree brought to France in 1421, lived and bore fruit for 473 years.