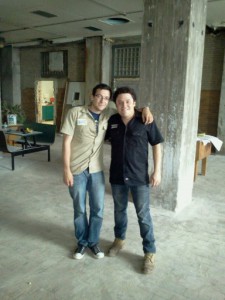 Breweries in the Chicagoland have begun to pop up in a frantic pace over the past couple of years. For an area as populated as Chicago, each and every American craft brewery is well received and warranted. The next wave is upon us with New Chicago Brewing Company ready to blossom on March 4th, 2012: the 175th anniversary of the incorporation of Chicago. Samuel Evans and Jesse Evans, brothers, are the two behind the ambitious endeavor.

New Chicago is embarking on a journey that will see the brewery part of a self-contained zero waste facility. The Plant, an old meat packing building, is being reconditioned by Plant Chicago and a group of businesses such that all waste, products, etc will be reused in some way or another to create little to no footprint. The brewery will use plants grown via hydroponics (a system in which plants (greens, mushrooms, and herbs), fish (tilapia), and waste from each feed and/or biologically keep the other) in their beers, while the waste (grains, water, and others) will be recycled back to that system via an anaerobic digester that will be underground behind the building. The anaerobic digester will use bacteria to eat the waste, turn it into gas, then, eventually, to create 850-degree steam. The steam will be used by the brewery to heat the water. 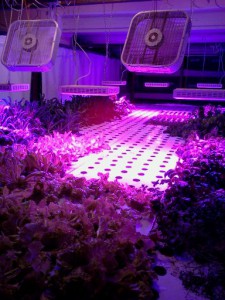 The brewery itself will occupy the entire first floor of the building, which has laid dormant since 2005, some 15,000 square feet. The east end of the building will be home to a 2,500 square foot tasting room. The west end of the floor will have the brewing and fermenting equipment, while the middle will be bottling, kegging, and the like. 90% of the walls will be knocked down to create the open air environment the brothers are shooting for: one in which a person can be in the tasting room and see the activity in the brew house.

The building is old which can be used to give that nice retro feel without much work. There is an old 40 foot long metal smoke house that is being cut up and used for bathrooms. The brick flooring is undulated, the plaster on the walls is being removed to show the old brick work behind, while modern energy efficient windows are being added to provide some charm. Up on the roof the space is being used to allow for growing of hops. Everything is being thought of, planned out, and executed with precision. 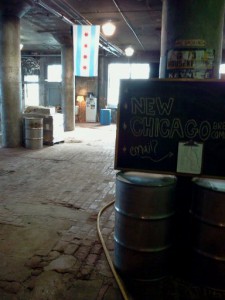 New Chicago has already ordered their brewing equipment, a 15 barrel system, that will include four, 30 barrel fermentation tanks. The wort will be cooled by using the chill of the basement to their advantage: pumping it down and back up again. There will also be a three barrel incubation system for teaching and experimentation purposes. Classes will be held to teach people how to brew on the premises, too.

Currently, with three other employees, the brewery should be built out sometime in October, start brewing in January, and kickoff in March. There will be three regular beers to start (guaranteed not to be regular): a lighter beer and two bigger beers. The coy brothers weren’t showing their hand but said their forte will be big beers. One-offs will be served in the tasting room while their mainstays will be kegged, bottled, and in six packs with a plan of 50/50 for the tasting room and distribution.

Rich and I appreciate Samuel and Jesse having us out, showing us around, and sharing their enthusiasm for this great project. We wish them luck. If you have time and want to help out, give them a call as they can use any willing and able body. Can’t wait to find out about the beers and see the brewery take shape. Enjoy!

This entry was posted on Monday, July 25th, 2011 at 8:30 pm and is filed under 365 Days of American Craft Beer, Beer. You can follow any responses to this entry through the RSS 2.0 feed. Both comments and pings are currently closed.