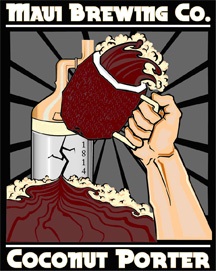 One of my goals is to have an American craft beer from every state. When I cracked open a can of CoCoNut Porter by Maui Brewing Co. for review, I believed that I had knocked one of the list: Hawaii. I was wrong. I had a bottle of Pipeline Porter by Kona Brewing Company back in February as beer #74.

CoCoNut Porter has been on my American craft beer radar for a while as I have heard good things about it and the beer has won many awards. I found it to be above average, at best, but not the barn burner of an award winner that it is. There are a ton of other porters I would prefer over CoCoNut Porter. Enjoy!

The list of states I still need a quality beef from if anyone is interested in helping: 🙂

Useless Fact: John Harvard did not found Harvard University. Harvard, a Puritan minister, simply left his library of 400 books to the college when he died in 1638. The college itself has been founded two years earlier and was first known as Cambridge.