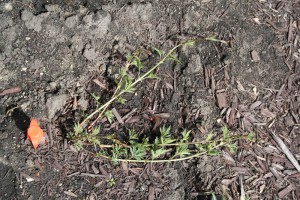 This past week in Chicagoland has not been nice, least of all to the hop plants. The centennial has grown slowly for about the past 10 days as the temperature hasn’t gone above 50 degrees and it has been cloudy, damp, and rainy. Just a wonderful Midwestern mix for the spring.

In spite of the slow down, the early warmth, has helped the longer bines to get to the two foot range already. I think I will be ready for some twine shortly to start training them up. As you can see in one of the smaller pictures below, I cut off enough bines to get me down to five: no need in letting energy being wasted by the plant in bines that I would cut off eventually anyway. I plan on allowing three bines to grow all season. Two more will have to go.

In the last picture below you can see the early beginnings of my new Mt. Hood plant. Maybe an inch of growth. I don’t expect this plant to grow more than 15 feet or so this year since it is a first year; spreading it’s roots and establishing itself will be top priority.

It seems like it should be a little warmer this week in Chicago, so I am hoping it will drop kick both plants into some more growth. Enjoy! 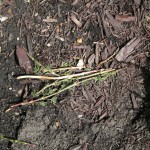 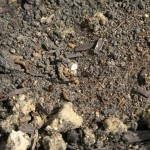