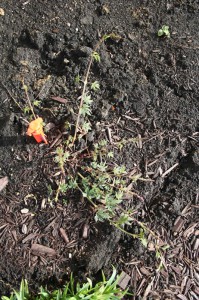 Last Sunday in Chicagoland was close to 90 degrees: my hop plant loved it! I brewed two batches of beer: Dirty Balls Dark India Pale Ale and Honey Pot Pale Ale. Chuck was over to shoot the shit and, per my request, brought me over a clipping of his Mt. Hood hops that we planted after the brew day.

The brew day went fine with both beers already done fermenting and the complete brew day taking about 6.5 hours for both batches. Not bad. I cool my wort in my utility sink, which usually takes about 25 minutes with me vigorously shaking the brew kettle every few minutes. Chuck was the extra set of hands I never had: he twirled the pot by the handle in the ice bath, almost constantly, and wort was down to temp in 17 minutes. Nice!

But this write is about the hop plant out back. In the last week it went from what I had last week to more than double the size this week. My strongest bines are now in the 14 inch range, if not longer.

Earlier I brought up last Sunday’s weather, today’s morning temperature was in the 30s. We have had some harsh weather this week: rain, storms, cold, etc and it seems to have stunted the hop plant a touch as most of the growth seemed to come earlier in the week. Heck, I think it grew a good two inches last Sunday. Ladies Day India Pale Ale will be in the brew kettle shortly. Enjoy!

Useless Fact: Undertakers report that human bodies do not deteriorate as quickly as they used to. The reason for this, they believe, is that the modern diet contains so many preservatives that these chemicals tend to prevent the body from decomposing too quickly after death.