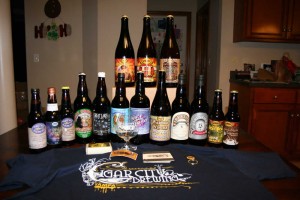 I decided it was time to join a BIF on Beer Advocate with Secret Santa being my target. I like sending out and I also like receiving, so those BIFs of chance are not for me. I realized that my list of American craft beer on that site is quite ridiculously difficult, so if I received a couple wants, I would have been happy. fogdog, my Secret Santa, hit up six of them. My thanks and appreciation go out to him for the work he had to do to put together the list of beer he sent.

The best thing about this haul: I have only had two of the beers on the list. I look forward to each and everyone of these while I am off during the Holidays. Enjoy!