How many times have I passed Lagunitas Brewing Company American craft beers on the shelves of the local beer stores? Too damn many to count. It seems like I get myself all excited about the limited releases (am I a bit of a band wagon jumper?), forgetting about the quality year round or seasonal releases that I have never tried. Lagunitas is probably one of the most affordable American craft beer brewers with most of their bombers in the $5.00 range; can’t beat that.

It was time to give IPA Maximus a try. Maximus is exactly what you would expect from a west coast IPA: pale and crystal malts forming that backbone that a big rush of pine and citrus hops are built on top of. The nose carries well with the flavor carrying a bit. Pine hops in the beginning with the end finding grapefruit hops that linger while bittering in the finish. You can’t wrong with this beer as the it is just as good, if not better, than beers twice or more the price.

After having IPA Maximus, I have decided it is time to frequent Lagunitas brews a bit more over the next 50 days of my 365 American craft beer jaunt. Enjoy!

Useless Fact: Anatidaephobia is the fear that somewhere in the world, there is a duck watching you. 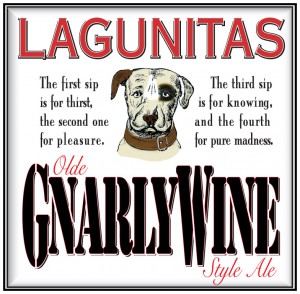 Thursday night get together have been sparse in the month of May but Rich and Steve made it out to kick off June. Much better.

I have always had the opinion that the more guys that can make it the better. This gives us all a chance to taste and try more American craft beer; what could be better?

I picked up Olde Gnarlywine by Lagunitas Brewing Company a few months ago. I have wanted to review this beer, especially fresh, so that I could experience the hop profile fresh. Steve has another bottle that he is going to cellar for a year so we can sample the beer with some age also. In spite of trying to have this beer fresh, I would say some of the hop profile has fallen out of the beer. It seems that it was grapefruit while the there is a big, chewy, thick toffee and butterscotch sweetness. The amount of sweetness keeps this beer from really being an easier drinker. Enjoy!

Useless Fact: In sixteenth- and seventeenth-century Peking, one took revenge against one’s enemies by placing finely chopped tiger’s whiskers in their food. The numerous infinitesimal whisker barbs would get caught in the victim’s digestion tract and cause hundreds of painful sores and infections. 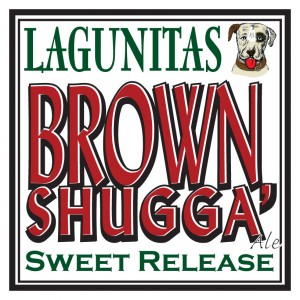 It seems that American craft beer is showing up in bars more regularly these days. Beer bars have a list, similar to wine, of their beer offerings: American and foreign.

Last night the wife said she would pick me up from work with the kids and we could have some dinner in the city (Chicago). I figured Jak’s Tap would be the easiest: we had been there before, has light traffic on Fridays, we all liked the food, and had a decent beer menu.

Now I say decent in terms of the beer menu because I only want American craft beer and that list is maybe 25 beers on tap. Not shabby, but most of these beers are geared towards trying to turn your macro drinkers.

Our server mentioned that Lagunitas Brown Shugga’ was a special at $4.00 a pint for the evening. How could I go wrong as I have never had the beer and beer on tap is darn tasty?

Brown Shugga’ has a heaping helping of brown sugar, malt, and, as I found out in the nose, a delicious helping of citrus and pine hops. The hops come through late in the taste and help to balance. The alcohol, which is at a dangerous 10%, does not even appear anywhere in the beer. Not good when you think how easy this beer is to drink. Enjoy!

Useless Fact: Most elephants weigh less than the tongue of the blue whale.

This weeks visit to the beer store seemed special. Not the kind of special like your fifth birthday but it was a good feeling to start putting the past two weeks of physical ailments behind and start fresh. I think the beer store is my place for inner well being and healing. 😉

The beer store different disappoint as there were some good new beers and even a new American microbrewery distributing to Illinois now. Yes, The Bruery is now selling its goods to the Land of Lincoln. I have heard and read good things about their beers. I had my first, Trade Winds, at the most recent TNBC meeting. I picked up a bottle of 2 Turtle Doves but will be back for Orchard White, Rugbrod, and Saison Rue.

My biggest complaint each week of visiting the beer store: I never have enough money to afford everything I would like to get. Enjoy!

By the title you can tell that I have been slacking on my beer enjoyment this week. To be honest after attending the Great Lakes Brew Fest up in Racine, WI this past Saturday, I really didn’t feel like throwing any back on Sunday or Monday. I guess old age is forcing my recovery times through the roof.

What about Tuesday or Wednesday? Wednesday I can vouch for easily: that is basketball night and I don’t get home until 9:00pm or so. Why not a beer afterwards? I need water and/or gatorade to rehydrate. Besides I get up around 5:30am to do some yoga. Yes, yoga. Never done until recently but I have knee and ankle problems that seem to completely disappear when I do yoga. I don’t even remember Tuesday, so I could I have drank anything. Tuesday I will just chalk up to a lost day.

Thursday had a hunters target on it for a few beverages. Anticipation started sometime on Wednesday (when I woke up) for work to end on Thursday and head home for some good American craft beer. air jordan 11 I had the following liquid goodness:

Three outstanding beers. I think I had all three down the hatch within 60 minutes. I couldn’t wait for the next one. Were the beers that good? Had it been that long since a beer touched my lips? Was it a combination? I think, possibly, it was a combination of both. No matter, I will try again tonight and see if I can have as pleasant an experience as last night. Enjoy!