By scot in Beer, Home Brewing on Thursday, October 4th, 2012 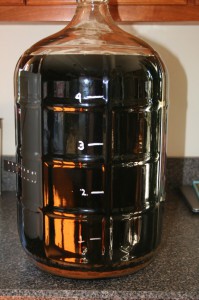 A good beer aged in a bourbon, whiskey, etc used barrel has always piqued my interest. The complexity of the beer is fantastic. Craft beer buys those big 55 gallon barrels, which are not practical for 99% of home brewers. I have always wondered if and how I could play wood stavesmen myself.

At a home brew club meeting six months or more ago, one member brought in a brand new five gallon barrel. Perfect for home brewing. The price was $80 or more, which I thought was a bit steep. Nonetheless the wheels have been turning.

Recently, Mike, over at The Mad Fermentationist, brought to my attention that used five gallon whiskey barrels were up for sale on Adventures in Homebrewing. I hesitated to do some thinking.

Double Bogey was sitting around, getting close to being bottled; that would be the perfect beer. But I really knew nothing about barrel aging: placing oak chips in bourbon isn’t even close. After a few emails with Mike on techniques, I looked past the price, I decided it had to be. 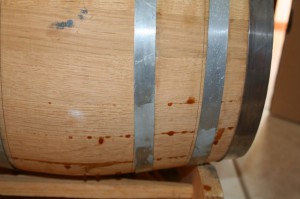 I received the barrel on Monday, oohed and ahed over it, and racked Double Bogey into the barrel on Sunday. The barrel leaked a bit, maybe a total of four ounces before the staves swelled to seal it tight. There is one issue I am worried about: I only had 4.5 gallons of beer. There is some head space which leads me to believe that oxidation could set in, I just don’t know how long it would/could take. I am tempted to bottle it this Sunday but might push it another week at most.

Somehow having a used, appropriately sized, whiskey barrel in your home brewing arsenal is empowering. Enjoy!

Useless Fact: There are professional tea tasters as well as wine tasters.