Do you ever wonder how fellow American craft beer aficionados are rating a beer recently? We all know that beers change from batch to batch and over time, if they are cellared. A beer may have a really good score overall or even a bad score overall but the brewer(s) could have changed the recipe, the beer could be past it’s time (if cellared), the batch might have become infected, etc. Any of these reasons create a question in our minds of how the overall score is impacted by more recent reviews. 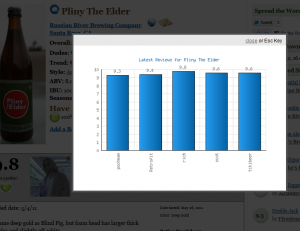 Two Beer Dudes has come up with a new trend rating. The trend rating will be just below the overall and two beer dude ratings. Currently it is set to show the average of the last five ratings on a beer (the most we have on anyone beer). If there are less ratings than the floor number (currently five), it will calculate the ratings for that number of ratings only.

There is a little graph icon at the end of the trend rating text that will pop open a modal window, displaying a bar graph that displays the user name and rating for those last five ratings. Once again, if there are not five ratings for a beer, the graph will display as many ratings that have been submitted at the point in time the page is visited.

Some thoughts for the future:

In spite of the fact that we don’t have a ton of users, we see this as a great tool going forward and fostering growth. Enjoy!

Useless Fact: The word “toady” originally referred to a magician’s assistant who literally ate toads as part of the show. Toads, at one time, were thought to be poisonous; when the “toady” recovered from eating one of them, it was considered an indication of the magician’s great power.