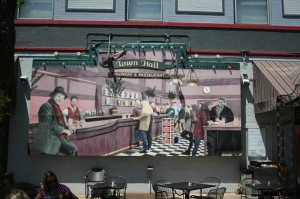 The first stop was Town Hall. I have heard good things about their beer and especially their food. Before the trip, the only beer I had tasted from Town Hall was Masala Mama, a really hyped up beer that definitely didn’t fill the bill. While there I tried the Mango Mama which, once again, was a beer everyone told me I had to try. It was okay at best and I eat a couple of Mangos every week. I love them. I also had the Grand Cru while the wife tried the West Bank Pub Ale. I have to say it, but we weren’t impressed with any of the offerings.

I don’t like to be harsh on breweries and I always try to find good in beers as I am a home brewer and understand the work involved, I just don’t feel the beers were much better than average.

On the other hand the food was really good as was the weather since we ate outside. Prices are good and the staff was very nice. A definite place to go to for lunch. 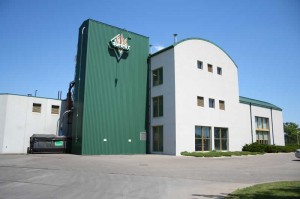 Next on the list was Summit. I had called the brewery, like I do every place before I go there to get hours and see if there is a chance for a personal tour and I knew they were officially closed for their normal tours. I just wanted to get a peek at the brewery, see what they had in the gift shop, and if there was anyone that would give me a nugget or two about the brewery.

I didn’t hit the jackpot but I was able to go into the brewery, check out the gift shop, and get a bit of a tour. Without going into the gory details, the tour netted me the following information: they are currently at the limitations of the brewery (100,000 barrels, which can be pushed to 109,000) and plan to expand, their entire process is run by a special computer system that was built just for the brewery, and they have six brewers on staff, each of which will be allowed to brew their own beer this year, without interference from the owner or other brewers. 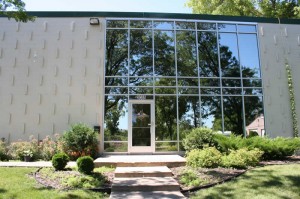 Flat Earth was the last stop on the brewery extravaganza before I was to go over to Surly for a 6:00pm tour. Flat Earth is no more than five minutes from Summit but unfortunately was closed. I took a quick picture and we were on our way.

Heritage Liquor popped up in my head as a good place to stop and get that “out” of our way. Who am I kidding, I couldn’t wait to get my hands on some Surly (still mad I didn’t buy more Furious) and other goodies I knew awaited me per my conversation with the owner, Ed.

The store doesn’t look like much from the outside but the quality of the selection, including singles, and the knowledge of the people within make this one of the best beer stores I have been in. Ed asked if I was interested in Surly Four, of course I was, so he pulled one out of the cellar. What a nice gift for my ride up from Illinois. Plenty of local fair as well as some west coast and mid-west beers were all to be had and I didn’t stop myself.

All-in-all probably the wildest American craft beer day that I have had in a while. Well worth the long hours of driving the night before. I am now in the planning stages of the next great craft beer escape. Enjoy!