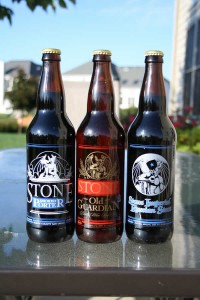 Anytime we take a trip more than an hour from home, I try to find a beer store or brewery that we can stop off at. Today we were headed to my cousin’s house in Dyer, IN to go apple picking. I have already been to Three Floyds this summer but I can’t pass up a chance for another stop. Also, I have heard about a beer store nearby that has Stone and a few others not available in Illinois.

We put in the address for the Liquor Store in Highland, IN first. After an hour or so of driving, Michael, my two year old, air jordan 9 and I headed into the store while everyone else was sound asleep.

From the information I have read on the net about the store I knew the American craft beer section would be just inside the door. Anticipation. The staff at the store isn’t that helpful. The beer selection for Stone is outstanding and they have a fair amount of Three Floyds to boot. They have various other regional beers too. A nice selection but not great.

My purchase list is full of Stone and FFF with a thrown in from Michigan Brewing Company.

Not a bad haul and at a fair price. air jordan 10 At the front register they did have a big table or two with at least one six pack of every Oktoberfest beer they had on hand. A nice touch for someone looking for a season brew. I plan on visiting this store in the future.

Next, off to Three Floyds in Munster, IN, only a 10 minute drive away. By the time we arrived, my oldest, had to use the bathroom so her and I headed into beer pub.

A successful beer trip to Indiana. Thank you to my wife for always allowing me to tack on these beer expeditions to our trips. Enjoy!