Why is it that many of the American craft beer web sites make it almost impossible to find information about their beers? On top of that, why do so many not keep that information up to date? Frustrating.

Beer number 350 is Doryman’s Dark Ale by Pelican Pub & Brewery is an American Brown Ale. This was from a version bottled in 2010 so there is a bit of age on the bottle.

Note: this is a lost post that I never pushed out and why I have two American craft beers numbered 350.

Useless Fact: Irénée du Pont, one time president of E. I. Du Pont de Nemours and Company, kept pet iguanas on his estate in Cuba. Mr. Du Pont spent many hours training these pets and succeeded in teaching them to stand at attention and to come when called.

A blend of styles: English pale and Belgian, the beer caries both sides well, complementing. Spices mingle with the sweet malty side. Easy drinking and quite nice. A definite beer to try. Enjoy!

Useless Fact: George Washington left no direct descendants. Though his wife Martha had four children by a previous marriage, Washington never sired a child to continue his line.

You ever kick yourself for passing up on an American craft beer? I have many times. Back several years ago, one of the local liquor store had a bunch of Pelican Pub & Brewery beers. I passed on them as I thought that Pelican was a normal beer to have in the area; I was more interested in other beers at the store, constantly passing. Of course after all the Pelican had been sold, I decided it was time to get interested in their beers. Too late.

Tsunami Stout was one of those American craft beers that I remember seeing on those shelves that I quickly and easily bypassed. A transaction landed one for me recently. It turned out to be lucky number 287.

Tons of malt flavor and aromas: roast, chocolate, coffee, peat, and more all are intertwined playing a fine tune. I felt the beer was a bit thin with too much carbonation which dropped the drinkability a bit. Definitely worth a look see if you have the chance. Enjoy!

Useless Fact: Midgets and dwarfs almost always have normal-sized children, even if both parents are midgets or dwarfs. 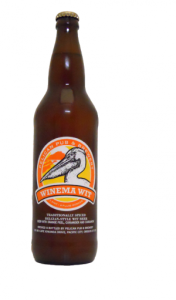 Throw ins: that sort of has off connotations, usually one to believe that they are nothing more than someone’s shit that they are passing on. It seems that it fits in all facets of life with American craft beer finding no refuge.

Winema Wit by Pelican Pub & Brewery was exactly that in a recent transaction: a throw in. I have found these throw ins to be hit or miss in the American craft beer transaction world. Winema Wit is a hit that keeps on coming.

Coriander, pepper, orange, Belgian yeast, wheat, and a touch of the “barn” all take part in creating a solid witbeir with a light mouth feel while a huge effervescence creates a larger presence. Easy to drink with an ABV that allows for a few at a time. Nicely done. Enjoy!

Useless Fact: More than 71 million gallons of water pass over Victoria Falls in Africa every minute.