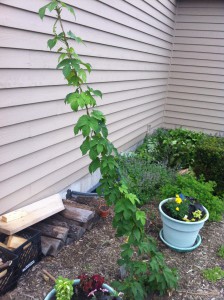 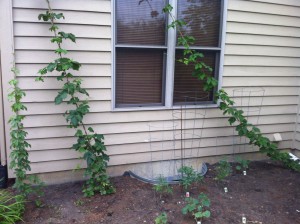 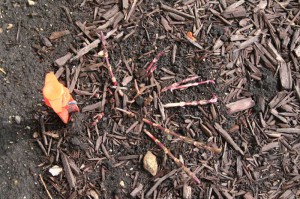 The spring is such a pleasant time in the Northern Midwest: things are changing for the better, the days are getting longer, and the hop plants start to break ground, giving home brewers thoughts of fine IPAs to brew in the fall. Thoughts of putting up rope, training bines, and cutting back all but three or so strong bines race through your head.

Last year I started to talk about the planting of my first hop plant: Centennial. Unfortunately things got away from me and I only made modest updates thereafter. This year, starting with this edition, I plan on talking about the hop plant every week, with Saturday or Sunday the target.

Since this is my first go around this year, I have included a picture of the plant from this past Saturday. It has broke ground with a vengeance, starting off strongly while easily surpassing the growth of the plant at this stage last year.

The only thing I have done to the plant at this point is check the root growth. I followed some roots off to the sides that are easily some two feet in length. I have added a second plant, Mt. Hood, close by, so I will be defining the planting areas at the beginning of each month, if not more often, to keep them at bay. I expect the growth of the Mt. Hood to be slow, while the Centennial has double in size since I took the picture.

My early goal with the Centennial is to make an all Centennial IPA so I get a good understanding of the hop profile. Mt. Hood will be used in all my stouts as I brew those a ton. Until this weekend, brew well. Enjoy!

Useless Fact: The lungfish can live out of water in a state of suspended animation for three years.

I thought growing my hop plant would be this wild and exciting adventure that I could fill up my blog with, at least, weekly updates. My world came crashing down on my quickly.

My first year Centennial hop plant was slow to get started. First year hop plants are busy growing roots and getting established, so being patient is the name of the game. Still, it is my first plant; I wanted to grow and be bountiful, all in a week. 🙂

The first few months saw nothing fantastic happening. I read forums to make sure my little hop plant had a chance, asked advice of others, and did my diligence to help the plant along as much as possible. In spite of that, the beginning of June didn’t leave me with a 20 foot bine on the side of the house. I had a two foot bine that was still growing slowly.

By the time July came around, some message boards were full of guys already harvesting from their 2nd, 3rd, etc year hop plants. Mine: a measly 4 foot tall on it’s tip toes.

Early July saw the family make a trip to the Minneapolis area. We were only gone a few days but I asked the neighbor to water the hop plant while we were gone. It was in the 90s and humid each day so I didn’t want the plant to suffer. Oh, it did suffer! I have no idea what happened but the main bine, that was about five feet tall, had been broken at the bottom and withering, badly. At least the next bine was only 1.5 feet behind.

The next day I decided to clean away the quickly drying out hop plant material. In my haste, I broke my tip off the longest bine!!!! Yeah, shitsville. In the back of my head any chance of getting my one wet hopped beer out of this plant were going down the toilet.

At that point, I just left it. The next bine was about six inches shorter, so it wasn’t far behind. July turned out to be a good month as up until this week, it had been growing a good two feed each week. For those lacking math skills that is a little better than three inches of growth per day.

This week the growth has slowed as the flowers have come out in force. The total height is in the eight foot range. I guess you could say it is a dwarf. But, I still may get enough hops out of this sucker to have a wet hop IPA come this early fall. Fingers crossed.

What have I learned? Don’t let your neighbor watch your hop plants, be patient, and wait for the second year for the hop plant to really go nuts. Enjoy!