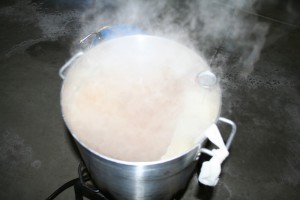 I changed the recipe of the original Backspin Belgian Pale Ale and used Wyeast 5112 Brettanomyces bruxellensis for this brew day. I brewed the beer only because I had this planned and the yeast starter (more to come) started the week before as I had a bad cold. I am hoping that I didn’t contaminate the beer with my disease ridden breath.

For the first time since I started brewing all grain I had my grain crushed by a different grain mill. The crush was much finer than I am used to. The mash tun manifold had no problem with my original gravity benefiting to the tune of almost 80% efficiency. I will continue using the same grain mill for the next few batches to determine if this will be the typical efficiency to expect from the mill.

The yeast starter I made the Sunday before I brewed. The starter was ready by Thursday, three days ahead of time, so I sat on it. Surprisingly it took off quickly, percolating quite nicely the next morning, 12 hours after pitching the starter. 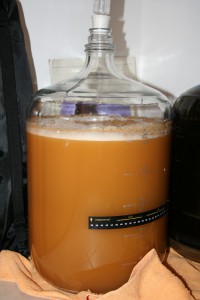 Outside of being sick, as I mentioned above, the brew day went well. I was very satisfied with the efficiency gained from the new mill crush (I usually double milled the grain with the other mill I was using). Now the hard part will be the wait until I hit my final gravity. Enjoy!

Useless Fact: The bumblebee does not die when it stings—it can sting again and again. In bumblebee hives, the entire colony, except for the queen, dies at the end of each summer. Each year an entirely new colony of bees must be produced. 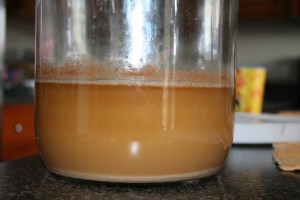 Brew day. I look forward to each one, increasingly so lately. The five hours spent home brewing takes my mind off everything else, focusing my minds eye on the process at hand.

Backspin Belgian Pale Ale is my first attempt at any type of Belgian style beer. Putting together the recipe took me to many websites, a few magazines, and a book or two. I noticed that the style is all over the place but that Belgian Pilsner malt was the base grain for the style. Yes, some use 2-row or others but 90% or more stayed along the Belgian Pils route. Recipes ranged from one specialty grain to as many as five. Typical suspects were Munich, Vienna, CaraMunich, CaraVienne, Biscuit, Aromatic, and even some sort of straight sugar. Some of the American centric ones used Caramel/Crystal malts as well. Hops included such types as Willamette, Goldings (U.S., East Kent, and Styrian), Saaz, Perle, and Fuggle.

This gathering of information aided in formulating a recipe. I shared the recipe with Michael Tonsmeire, who continues to be a huge help while putting up with my constant barrage of questions, and Dave, the guy that works at the local Brew & Grow. Mike mentioned that he thought my recipe was going to be too sweet, Dave backed it up and let me taste a Belgian Pale Ale he brewed with only eight ounces of CaraMunich for a five gallon batch: too sweet is right. 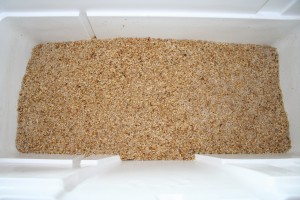 From those constructive critiques, there was one issue that I thought about the rest of the day: I had already mixed the grains, had them in my car, and was going to mill them on my way home from work, how was I to adjust my grain bill? Throw out the grains and start over? That’s a waste. Mike gave me several ideas, including using a low mash temperature to allow for the beer to finish dry. A counteractive measure to the large amount of sweet malts. I mixed that idea with the fact that I knew I placed all the specially grain in the bottle of the bucket. I carefully pulled the base malt and a bit of the specially malts from the bucket into the grain mill, added an extra pound of Belgian Pils, and placed the excess sweetness to the side.

What does this mean? Two things: first, I have no recipe to share as I am embarrassed of my original. Second, I have no idea what the final recipe was after pulling off some of the original grains. I have ideas, that will help me make the recipe so I can do the next one on all Brett.

Overall the recipe formulation was much worse than the brew day, which went off without a hitch. I did mash at 148 degrees for 90 minutes with a 60 minute boil. A yeast starter of 2L was made using WLP500 Trappist ale yeast. I pitched the yeast around 3:30pm and it was going great the next morning. Fermentation has the temperature around 63 degrees because it is in the basement. After three days I will bring it upstairs and let it rise to ambient temperature of 67 degrees which is where it will sit until it is time to bottle. Mike helped here with the fermentation schedule.

I don’t have high expectations for this beer, especially since I don’t know the final grain bill, but I feel like I did my best to pull something good out of it. More to come after bottling. Enjoy!

2012-02-08: Temperature up to 65 degrees with three bubbles or so every two seconds. I am hoping this will aid the yeast in finishing fermentation.