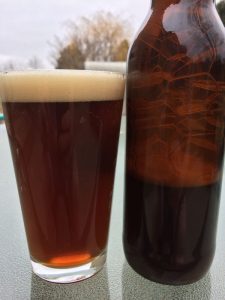 Carrot Top took a few weeks bottling condition in order to round out the flavor and aroma. The first taste, a week to ten days in the bottle, made me fret what this beer was going to be. As always patience won out, allowing for this to become more of what I was envisioning when developing the recipe.

Each time I enjoy this beer, I think back to those grade school days, the 70s, and all the other memories of my youth. I wasn’t drinking beer back then, lol, I didn’t care for the aroma of my uncles Buckhorn and I thought I would never be a beer lover. I am sure glad that Samuel Adams found its’ way to my coffers as I couldn’t stand too much more cheap lagers. Nostalgic.

Look:Deep amber, almost brown in color. Half inch of off-white, creamy foam covers. Retention is above average, eventually leaving a thin blanket on top. Lacing it thick and sticky. Good looking in the glass.

Aroma: Papaya, tangerine, citrus, grass and hints of spice are first. Clean sweetness and caramel bring up the malt end.

Taste: Slightly sweet, caramel throughout. Hops are above normal level for an amber but not overbearing. Papaya, citrus, grass and spice carry from the middle to the end. Some bitterness but on the balanced side.

Overall: A nice beer. Maybe a bit too dry for an amber. Maybe not enough malt profile as well. The hops are solid for the style. Otherwise a solid beer.

I liked the beer but not as much as The Dude. Possibly style difference, lack of reverse osmosis water, or that I feel it needs more malt. If and when I brew this one again, I will would want to change several things: maltier, higher mash temperature, and reverse osmosis water split 50/50 with tap water. Enjoy!

Useless Fact: The seats and curtains in theatres are red because red is the first colour that is lost to our sight in low-light conditions, which thus makes the surroundings seem black and unobtrusive when watching a movie or performance. 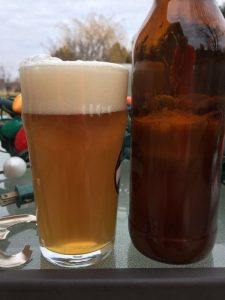 The Dude is the first NEIPA (New England India Pale Ale) that I used some reverse osmosis water. It also marks the largest number of different hops, seven, and the first time I used all 2015 hops.

Fresher hops also makes sense. I still have seven pounds of 2015 hops to blow through before I even think about 2016 hops. At the rate of hop usage that will be another 6 – 8 IPAs. My taste buds are waters. Time to get another recipe ready.

Look:Pale gold in color. Covered by full inch of snow white foam; thin but somewhat frothy on top. Great retention, leaving behind immediate and coating lacing before even titling the glass for a sip. Good looking beer in the glass.

Aroma: A light, sweet malt backbone isn’t supposed to be the center of the aroma; it isn’t. Ripe fruits abound: mango, pineapple, apricot, citrus, and pine.

Overall: One-upped myself as I believe this is the another quality NEIPA. The mix of hops goes well together as well as providing depth of aroma and flavor. Still trending to the high end of the carbonation profile. Might need a bit more body as well,

Used a full breath of hops in this beer. It paid. Peeking at the three week in the bottle range. Need to drink quickly. Someone has to sacrifice. Enjoy!

Useless Fact: Caodaism is a Vietnamese religion that worships Joan of Arc, Shakespeare, and Muhammad. 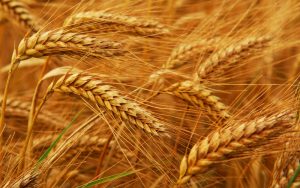 I haven’t had much time to brew lately. Telling the wife that I would make a beer she likes seemed to be the best way to carve out time from our busy schedule while doing good for others. 😀

I decided on Grass Cutter. Brewing it would have to do without the Saaz hops that I normally use as I was out and a trip to the home brew store wasn’t in the schedule. Not a big deal. Once brew day arrived, I collected up my supplies, including Azacca and Cascade hops. Yes, I know, no where near Saaz. It’s what I had.

How did I come up with a new beer? First off, asking that rhetorical question loosely. Secondly, on brew day I was missing coriander as well. Coriander adds more pronounced orange while giving off some pepper notes as well. This is a big change to a beer that usually consider to be an Americanized Belgian Wit.

I had zigged around the hops, now it was time to zag around the missing coriander. Two major changes to a single recipe make for a new recipe, thus Winter Wheat Ale.

I also decided to add the zest at one orange, soaked in vodka, at bottling. I did this in the past with Grass Cutter and it adds a huge orange boost. Cheers to hoping this one turns out somewhat decent. Enjoy!