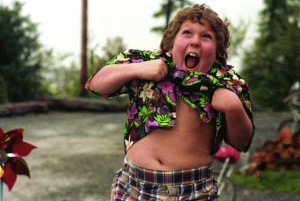 Chunk, the second DIPA in the Alpha Acid Aspirations series of home brews I am cooking up. Blast, the first, received high accolades from my friends.

With Chunk I was trying to create a more robust DIPA that had an above average amount of malt backbone. I attempted this by using Maris Otter as part of the base malt (split it 50/50 between Maris Otter and 2-row). Mashed at 151, so I added a pound of table sugar to help dry it out.

This beer was loosely inspired by Furious by Surly Brewing Company. I took to 11 by making it into a DIPA as well as changing the hop profile. Enjoy!

Useless Fact: There are an average of 178 sesame seeds on a McDonald’s Big Mac bun.

I have felt that the bigger beers (greater than 9.0%) I have been brewing are not coming out how I have envisioned. I am looking for a big beer, with alcohol, but smooth. Should include a heavy body, sweet without being cloying, and dark malt characteristics.

Mine have been dry (using American Ale yeast, changed in this batch). Mine have had too much alcohol that doesn’t smooth out (changing fermentation temperature – not allowing over 68*F). Mine haven’t had a ton of dark malt character (upping amount of specialty grains, basing on recipe in Brewing Classic Styles).

A lot of changes for a single recipe but I feel they were all well educated changes. I also felt the beer needed big changes. I wasn’t close to what I wanted; drastic measures.

Happy with the beer. Definitely dark and full of dark malt. When I rack to the barrel I will give it a try. Enjoy!

Useless Fact: Ninety percent of all species that have become extinct have been birds.

Sometime in May of this year, I was playing around with recipes. American Imperial IPA recipes to be exact. During this time, I decided that I needed to come up with a “series” name for the beers I was concocting. Since almost all of my beers are named from my years of caddying (usually golf terms), I had to get a golf spin to the name while evoking thoughts of hops. Alpha Acid Aspirations (my own version of AAA) was born with each beer being named from the caddying days. The word “aspire” is in there to promote my goal with these home brews: lofty heights for hoppy beers. I plan to make at least 26 home brewed beers in this series: one for each letter of the alphabet. A few letters will be tough. At this point, I have no plans of brewing the same beer twice, but, hopefully, I will manage a few annual home brew members. 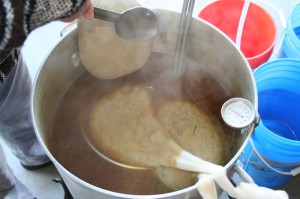 IPAs constitute one of my favorite styles of beer to home brew. The amount of hops that are available, the amount of new hop varieties, and the pursuit of new varieties, allow for this style to evolve from just a hop standpoint alone. This beer, Blast (the first beer in the series is Aerosol, but I wanted to start with this beer), is centered around Citra with Simcoe hop highlights.

A third of my base malt is Pilsner. I know these beers are about the hop but I was trying to see how the Pils graininess would mix with a basket of hops. I also added wheat and oats for head retention and body. A half pound of table sugar was added besides the low mash temperature to really dry this beer out.

I figure this beer to be in primary for three weeks. Racked and dry hopped for a week. Bottled, hopefully conditioned two weeks thereafter. A total time of six weeks. Enjoy!

Useless Fact: If you yelled for 8 years, 7 months and 6 days, you would have produced enough sound energy to heat one cup of coffee. If you fart consistently for 6 years and 9 months, enough gas is produced to create the energy of an atomic bomb.