Temperature influences all aspects of beer.  Brewing can be broken into three parts.  Brewing beer, Fermentation, Storage/Serving.  While Brewing beer, the mash temperature will influence the wort you create.  Books have been written on this process and maybe future Gear discussions will tackle this topic.

Storage/Serving temperature is probably the most widely known aspect of beer.  “COLD BEER HERE!”  The temperature a finished beer is served at alters it’s flavor.  Some beers are served extremely cold.  Some should be close to room temperature.  Whether you are bottling or kegging, many home brewers find themselves buying a small fridge or kegerator to hold their beer and serve it at a temperature they specify.

A Digital Control is the same thing, except DIGITAL!  A digital control is more reliable/accurate  and it has some subtle features such as a delay on the on/off so a motor isn’t burned up by constantly cycling on and off.  There is also a finer control on the temperature control as well as the temperature difference before an freezer/heater is turned on/off.  It’s essentially a more sophisticated control and you guessed it, it costs more!  They run about $80 to $100.

One of the Cheap Bastard conversations I have with people deals with time invested.  If my time is worth X, is this project worth it?  I’ll leave that for you to decide.  Material cost about $50 and it took me about 4 hours to build.  At $10/hour that’s $90 or a wash.  At $20/hour then it’s a loss.  If your a parent with limited time I would argue this project isn’t worth it.  Support your local Home Brew Store and buy a Temperature Control Box off the shelf.

On the flip side, I enjoy building gadgets.  That’s my thing.  Brewing is a hobby that involves many skills and can go in many directions.  Most brewers focus on the obvious, making beer.  I enjoy making beer, but I can say honestly, I enjoy making gear more.  I would be very happy building brew gear and never brewing.  Crazy?  Maybe.

After gathering all the parts, I opened a New Glaurus IIPA, put some music on, and started my project.  I took a break to have dinner and a second break to play with the dog.  Four hours and I could have done it faster.  As far as I’m concerned, that’s a good use of my time and at least $40 in my pocket ($90-$50).  And then there’s bragging rights.  Where did I get that?  I made it and it cost half as much as yours.  For me, that’s often the best part.

I wanted to write three Essay’s on Failure.  One would focus on knowledge, the second on assumptions, the third… gear.  Excluding mistakes, I think every failure can be lumped into one of these three categories.  Either you learned something wrong (knowledge) , you concluded something that is false (assumption), or your equipment screwed you (gear).

My goal is to write future entries on real world applications, a lot less theory.  However, I wanted the theory up front so when I hit a problem, I could reference one of these three essay’s and move forward rather than put time into detailing why an issue is an issue.

On Gear:  Problems with Gear are a physical manifestation of Essay One (Knowledge) and Essay Two (Assumptions).   When I met Scott I had been brewing for about a year and half.  He was a young brewer, with limited knowledge.  He was making all the same small mistakes I already made.  One of the things I pointed out to him was some of his gear sucked.  For instance, his siphon method.

Essay One: Knowledge.  Scott didn’t know a better way to siphon. Essay Two:  Assumptions.  Scott assumed that a better way to siphon might exist, but it wasn’t “that much” better.  Combined, these two elements allowed Scott to be ‘satisfied’ with a siphoning method that was constantly frustrating.

I can imagine the reader thinking, “I would never be ‘satisfied’ with gear that irritates or frustrates me- that doesn’t make sense.”  As a person that participates in two local brew clubs, who has over the years, developed a multi-state network of home brewing buddies, I can assure- you all hobby brewers work with at least one piece of crappy gear.

And why do they keep working with that crappy item?  They almost always say, “It’s what I got.”  or, “What else is there?”

It amazes me that home brewers will spend hours working on a recipe, studying the difference between Canadian Two-Row and U.S. or English Two Row, but they can’t put a dime into equipment after that initial purchase.  This is what I bought, so this is what I got.  If they do decide to buy something, they price everything out and always buy the cheapest item.

On this topic, one of my nicknames is “Cheap Bastard”.  I’ve been encourage to open a brewery called “Cheap Bastard Brewing.”  By no means am I encouraging my fellow brewers to buy the most expensive equipment that exists, but look at your brew day, consider the worst part of the day, then wonder, “How can I make this day better?”  The solution is almost always improving your method, and that’s a fancy way of saying improving your gear.

When Scott was insanely frustrated with siphoning his wort to a carboy, I would say things like, “Your transfer tube is to long.”

There is a mental leap to take a purchased item and “break it” by cutting it.  But when he ‘broke it’ (cut it) it was less frustrating.  Modifying his gear made siphoning easier.  When sludge clogged his siphon I would say things like, “I use hop bags/socks.”

How could a bag matter?  (Lack of) Knowledge and (wrong) Assumptions caused him to hesitate.  That hesitation made getting his beer into a carboy the longest worse part of the day.   When he started using a hop back (gear addition), the sludge issue disappeared and wort transfer became easier.

This hesitation isn’t exclusive to Scott, I’ve done it and I’m sure all hobby brewers have done it.  We all wonder, “Will this improve my day?  Is it worthwhile?”

I believe anything that makes brewing more fun is worthwhile, but that doesn’t mean I’ll pay for it!  I have a lot of projects under my belt.  I might go back and detail the successes and failures of completed gear.  I have projects I still intend to build, and I plan to detail them as well.

I suspect discussing my gear will touch upon reoccurring issues all brewers experience.  These failures in method can typically be traced to bad gear and I have a huge problem with bad gear.  That’s one of the reasons my call-sign is Retrofit.  The passion and thought Scott puts into making great recipes, I put into my gear.  My “Failure Trilogy” is complete.  It’s time to talk about good brewing.  Not good recipes- Scott can handle that topic.  I’m the gear guy, and my gear… will make your beer… better.

For buy dissertation visit or site.

Posted in Beer, Essay's on Failure, Home Brewing | Comments Off on Essay’s on Failure: Gear

Finally, Kegging Is Within My Reach 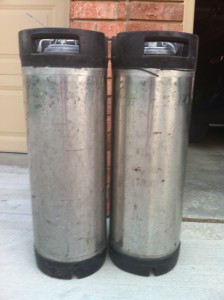 Two used by new to me Corneilus Kegs

Only three years of home brewing under my belt and I finally have kegs. A Father’s Day gift from my kids landed me two Cornelius kegs. Of course they are used, of course they are dirty, but they hold pressure. Cleaning will happen this weekend when I have some free time to properly devote to the process.

I know that two kegs doesn’t mean I will be kegging beer any time soon. I still need the following items (is the list complete?):

Looking at the list of necessary items, I don’t think my wife realizes all the extra equipment that is necessary. Wait until I start needing more gadgets. The conversations are going to get interesting. I least I am a step in the right direction. Enjoy!

Useless Fact: Spiral staircases in medieval castles are running clockwise. This is because all knights used to be right-handed. When the intruding army would climb the stairs they would not be able to use their right hand which was holding the sword because of the difficulties of climbing the stairs. Left-handed knights would have had no troubles, except left-handed people could never become knights because it was assumed that they were descendants of the devil.

Tags: home brewing
Posted in Home Brewing | Comments Off on Finally, Kegging Is Within My Reach

Since stopping at the brewery on the family vacation in 2010, I have only had Furious on a few select occasions. Therefore I was delighted to here that Rich had to head up to Minneapolis for business. Better yet, he was driving. Load up the car!

After sharing a Furious at Rich’s house shortly after the trip, I realized that the three 4-packs were ridiculously short sighted on my end. I think I forgot how much this beer makes my senses happy. I went through four of them in a “controlled” weekend as well as a Coffee Bender. Why didn’t I buy more? Was thinking the wife might be angry if I spent too much. Of course, after the fact, she said I should have pulled down a case. Crap, missed opportunity.

This beer is delicious no matter which new hop hits the market. I plan on having the last eight cans over the next couple of weeks; that’s as long as I can make them last. The best part about it: the beer is only 14 days fresh. Yummy. Enjoy!

Useless Fact: Grapes explode when you put them in the microwave.

Since I enjoy home brewing, I really like finding an American craft beer that is outside the box thinking behind it. Crooked Stave Artisan Beer Project is in the infancy of its’ existence but they are pushing the envelope with Brett, and multiple strains at that, in each and every beer. There is a “Wild Wild Brett” series is 100% fermented with Brett along with some spices and, to this point, tries to include one “color” of ingredients.

Wild Wild Brett Yellow is part of the aforementioned series of 100% Brett beers. Yellow has turemic, corriander, mango, and spices. The spices come through in the nose as the central point of the beer. A slight tartness comes in behind, cutting through those spices. Mango, which I fine to have a subtle flavor fresh, doesn’t really hit the senses for me. The taste is a bit more balance and definitely interesting. Turemic lends a ginger, earthiness to the beer that is cut by the tartness in the finish to not allow it to build to strongly. The finish tries to dry but there is enough “juiciness” to push it aside.

With the bottle shared with Rich only six months old, I tend to believe this will age nicely, becoming more complex. The difficulty is landing more bottles (only 1408) and being able to control myself in the cellar. Definitely worth your effort in attaining. Enjoy!

Useless Fact: A jumbo jet uses 4,000 gallons of fuel to take off.