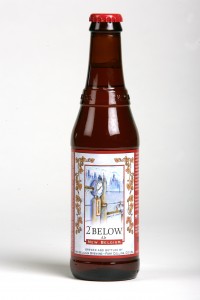 Okay, I am going to admit this up front: Sunday was a busy day, not allowing me a chance to enjoy an American craft beer while at home. 2° Below Winter Ale by New Belgium was my only choice outside of macro brews at a friends house.

How did I get there? We were invited over to watch the Bears game. They are huge fans and usually have people throughout the playoffs, if the Bears get in, and this being the last game of the season against the vaunted Packers, why not have a get together. Now I will have to say our host, Butch, purchased the beer as he knew I wouldn’t like the “other stuff.” So kudos to him for trying; the thought is appreciated.

Now the beer. I am writing this article the day after I had the beer and I don’t remember much. The beer was almost freezing when given to me, so that cut out just about anything at the beginning. I ended up nursing the beer as it just didn’t do much for me or seem to have much going for it. I will have to have it again to really put down my true thoughts. But from this experience, I would say it is just an average beer at best. Enjoy!

Useless Fact: The citrus soda 7-UP was created in 1929; “7” was selected because the original containers were 7 ounces. “UP” indicated the direction of the bubbles.