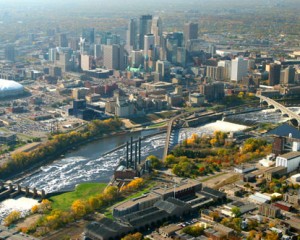 The one constant in my life is that plans always seem to change. The original plan was to leave on Friday, July 02, for a weekend stay in Minneapolis, stopping back in Madison, WI on the July 04 and then blueberry picking on the fifth in Rockford, IL. Yeah, yeah, family fun. Like I said plans change: we ended up leaving Thursday night after work, making to our hotel by 2:30am. Not bad.

The new overall trip plans: none. Outside of the second being beer bouncing day, there was nothing else was in concrete anymore.

Friday: late start due to the early morning arrival. Visited Town Hall Brewery for lunch and had a few beers. After lunch, the kids were so happy to hear we were heading to another brewery and I didn’t hear the end of it for the rest of the day. 🙂 Next we were off to Summit and Flat Earth as they are about one or two miles apart. I knew that Summit didn’t have any tours but I still wanted to stop. I did end up getting a generic tour from one of the office people and directions to a nice area to stomp around in the mighty Mississippi River. Before the river we stopped at Flat Earth. Nothing doing, completely closed. The last stop of the evening, before dinner, was Surly for a six o’clock tour. More to come on this tour as it was an awesome time.

We also found time to make it to Heritage Liquors, which is an awesome beer store. Zipps was on Sunday but it didn’t seem as cozy as Heratige.

More updates on this trip to come, including the to Surly and Town Hall Brewery. Enjoy!