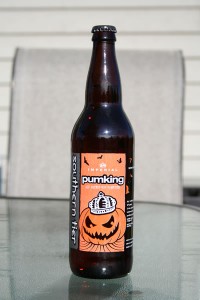 Unbelievably I still had a couple more pumpkin beers from Two Beer Dudes Oktoberfest party that celebrated the American craft beers Oktoberfest and pumpkin beers. Even further out there: I have a few more to review. free run 3.0 v3 femmes I don’t know if being more than a month removed from all those tasting has dulled my palate but the two offerings I had last night had to be on the better side of the pumpkin beers: Pumpking by Southern Tier Brewing Company and Frog’s Hollow Double Pumpkin Ale by Hopin’ Frog Brewery.

Pumpking is hands down the best pumpkin beer I reviewed this past year and I have a hard time believing there is one much better. In spite of the high ABV (7.9%) none could be detected in this very well balanced beer. The aroma and taste both have spices and pumpkin that are keenly matched with a bit of hop spiciness in the end with some bitterness riding sidecar. A definite keeper from year to year. 9/10

Frog’s Hollow is a self proclaimed imperial pumpkin ale (8+% on the ABV). I expected craziness on the spice and pumpkin but the beer was much more balanced and, thus, enjoyable because of said symmetry. Allspice, nutmeg, cinnamon, and pumpkin all play their parts to form this very drinkable rue. My one minor complaint: throw a little bit more hops in there to let it be felt. Another really good pumpkin beer that should be on anyone’s seasonal list. 8/10

I am looking forward to finishing off this spiced beers so that I can get ready for the Christmas and holiday beers that are on the shelves now. Good thing Pumpking has such a short name or the title of this post would have been ridiculous. Enjoy!